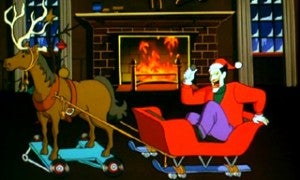 Just like various "very special episodes", can't miss events and other TV specials, a Christmas episode of beloved television shows was, for a long time, a staple of the fall TV schedule, and the episode was sometimes repeated year after year during the show's run. Comic book related shows, of the animated and live action sort, are certainly not exempt from this, and over the years there have been a mix of the funny, effective, strange and touching episodes related to the holiday season. Listed below are a few of the more memorable, for naughty and nice reasons. Batman: The Animated Series "Christmas With the Joker" This first season episode of the groundbreaking animated series gave us a classic episode featuring Batman's arch-nemesis on the loose at Christmas. The episode takes us through a runaway train, Batman racing against the clock, deadly toy soldiers, and Joker in a button-up cardigan! Throw in a rare first season appearance from Robin and you've got an episode that wonderfully features the connections between Bruce, Dick and Alfred as well as a great display of the Joker's frantic mania! X-Men: The Animated Series "Have Yourself a Morlock Little Christmas" Towards the latter part of this series' run, the X-Men tackled the season, focusing on young Jubilee's enthusiasm for the holiday season. During a shopping trip, however, Jubilee, Storm and Wolverine soon find themselves needed by the Morlocks when one of them falls ill. Lessons are learned, lives are on the line, and just in time for the holidays in this more heartfelt episode of the action-oriented series! Perhaps a bit maudlin, but you gotta admit, nothing like a sick kid to get you every time at Christmas! Buffy the Vampire Slayer "Amends" This was one of the rare episodes of BTVS that focused more on a supporting cast member than the Slayer herself. This season three episode saw Angel dealing with his past victims in a proto-Scrooge-visited-by-ghosts kind of way, courtesy of The First, the ultimate evil. Throw in a backdrop that shows a tenuous Christmas celebration between Buffy and Faith and you've got a very fine example of a non-traditional Christmas episode. The final scene between Buffy and Angel and snowfall make the episode even more worthwhile. (Sorry, clip not available!) The Tick "The Tick Loves Santa" It seems that hero The Tick and his sidekick Arthur encountered many strange and interesting beings, from Dinosaur Neil to Proto-Clown, during their days protecting The City, but Santa would prove to be one of The Tick's toughest foes. A Santa gets supercharged powers and, in a very Gremlins kind of way, begins multiplying. What makes the episode so hilarious is Tick's inability to get past the image of Santa to take down a bad guy. Justice League "Comfort and Joy" The Flash, Green Lantern and Hawkgirl get the featured treatment in this episode that focuses mostly on perceptions of the Christmas season. There's a nice back-up story involving Superman taking the Martian Manhunter home to Smallville for the season, and Martian Manhunter's Christmas morning provides a nice bookend to this episode. GL and Hawkgirl have vastly different ideas on celebrating, and the Flash enlists an unlikely ally in the Ultra Humanite while bringing Christmas to some orphans. He-Man and She-Ra: A Christmas Special This is one of those occasions where the Christmas spirit was wedged in by the power of Grayskull. Starting out as a party for Adora and Adam's birthday, the story soon turns into an intergalactic adventure involving spy ships, Orko's tomfoolery and a trip to Earth! Two Earth children end up bringing the Christmas spirit to Eternia, and it's, apparently, a great source of concern for Horde Prime, the leader of both Skeletor and Hordak. It's truly too bizarre to describe, but it's a kiddie classic for many who were wee in the 80's! Batman: The Animated Series (we'll call it this for the sake of argument) "Holiday Knights" This episode had a feeling of a holiday special comic book, with different, short vignettes featuring various characters from the expanded Batman animated universe. There's a great Harley Quinn and Poison Ivy feature, a quick but clever Batgirl vs. Clayface piece, and a slightly dark piece featuring the Joker on New Year's Eve. Concluding the piece is a smart and very brief feature on the relationship between Jim Gordon and Batman. We hope these clips bring back some Christmas joy for you! They may not be the Grinch or Charlie Brown, but for many cartoon and comic book fans, these episodes are just as much a part of the holiday as those beloved classics. Maybe you'll find a new one in this collection that you'll add to the festivities next year!