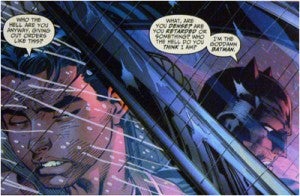 Bleeding Cool reports that DC Comics co-publisher and series artist Jim Lee has still not given up on All-Star Batman and Robin the Boy Wonder, despite it being more than four years since the last issue was released. According to their report from MorrisonCon, Lee says that there are two more scripts already written by Miller for Dark Knight: Boy Wonder, the announced-but-never-published six-issue follow-up to the series. The title change served a couple of purposes: it allowed Miller and Lee to start over and not worry about the supposedly-monthly schedule of the All-Star line, and it also more accurately reflects the book's contents. Miller has said in the past that the series is set in the same universe as The Dark Knight Returns and The Dark Knight Strikes Again. The All-Star line (which so far has only seen a ten issues of Miller and Lee's Batman and a year of Grant Morrison-Frank Quitely Superman published) is ostensibly an opportunity for top creators to present new takes on DC's iconic characters. It's unclear when or if Lee will be able to draw the two issues, and whether Miller continues to work on other scripts for future issues. Lee will wrap his run on Justice League soon, but is widely rumored to take on the art chores for a monthly Superman series from Batman writer Scott Snyder. Even though it's widely reviled by fans, All-Star Batman and Robin the Boy Wonder has sold very well every time an issue has hit the stands. Between Frank Miller and Jim Lee, though, the title didn't have a creative team known for consistently hitting their deadlines--and after its tenth issue, the title appeared to simply die on the vine. A 2010 announcement was made that the series would return with the new title in 2011, but it seemed as though Lee became consumed by The New 52, and Miller was busy writing the film adaptation of Sin City: A Dame to Kill For and his 300 follow-up.

Fortnite: How to Get a Goat Simulator 3 Skin

Thunderbolts Adds a New Marvel Monster to Its Team Roster

WWE Star Posts Cryptic Tweet, Says They "Know Why" WWE Holds Them Back