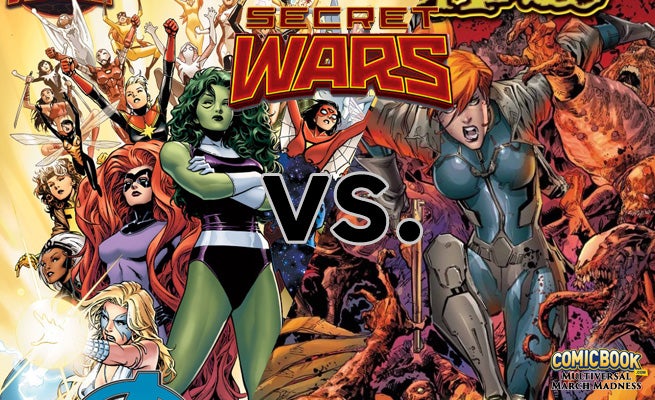 Arcadia Vs. The Deadlands

Stats: In a remote part of Battleworld, there exists an island that is protected by A-Force, an all-female Avengers roster. A powerhouse who's who of Marvel heroes, the A-Force boasts She-Hulk, Medusa, Storm, and even Phoenix. Phoenix alone is capable of destroying planets, but imagine that teamed up with a league of heavy hitters right behind her. It is truly a "force" to reckon with.

Advantage: Strength in numbers. Plus, a combination punch from Valkyrie and She-Hulk is a two-hitter quitter.

Disadvantage: The team's chemistry, with possibly "too many cooks," could lead to disorganization and strained teamwork.

Stats: The Deadlands, a.k.a the Zombieverse, are Battleworld's zombie-inhabited region. . Zombified versions of Giant-Man, Wasp, Col. America, Spider-Man, Hulk, Wolverine, and Silver Surfer shouldn't have much a problem tackling any opponent since, you know, they're undead and all.

Advantage: Somewhat difficult to kill. Even if you decapitate somebody, their heads remain sentient. And with every character they bite, they add to their ranks thanks to the zombie virus.

Disadvantage: Thinking with their stomaches instead of their brains (or lack thereof) the Marvel Zombies are not the most loyal to each other. And when the Hunger sets in, they could grow lethargic and distracted.

Who are you hungry to see move forward: The Marvel Zombies, or A-Force? Decide in the poll below!