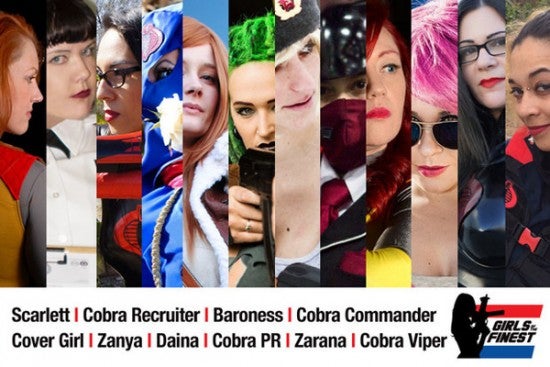 In support of their ongoing IndieGoGo campaign to make a nonprofit "Girls of the Finest" G.I. Joe cosplay calendar to celebrate the property's fiftieth anniversary, organizers of the campaign have teamed up with writer/comedian Kevin Conn to produce a new video raising awareness of the project. "We also wanted to show our support for the Real American Heroes that make up our U.S. military," the campaign writes. "Thus, all net proceeds earned from this campaign will go to benefit the Wounded Warrior Project. That means whatever money is left after we pay for the printing and distribution of the calendars and all associated perks will be presented to the Wounded Warrior Project with our thanks." There are currently 39 days remaining to contribute to the campaign, which is just past its halfway point (they hope to raise $7,500 and as of this writing have $3,775). Rewards range from a postcard at the low end to a private Q&A with the calendar girls at the $250 donation level. You can see it embedded below.

You can check out the campaign at the link above. Conn also launched the latest video in his series of Unemployed Skeletor comedy shorts; this one, asking for questions from fans for a Q&A (done in character, of course). You can check that one out below, too.

Skelly describes himself (on Twitter, anyway) as "A former overlord of evil, now living on Earth, in a box. I feel like i'm in hell."  Feel free to contribute to the Q&A...just don't ask him about Lava-Roid; he hates that guy.

My Hero Academia Finally Addresses Shigaraki's Beef With All For One