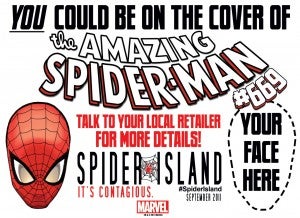 Marvel has definitely been pulling out all the stops with some very innovative promotions recently. First, there was the comic shop variant promotion in Amazing Spider-Man #666, which gave comic shop retailers the chance to have their stores featured on a variant cover. Next, there was the return of Marvel's somewhat controversial Comics For Comics Program, where retailers could return the covers of certain comics from Marvel's competition in exchange for a rare Marvel variant edition. Now, Marvel has announced what is our favorite promotion yet. Why is this latest promotion our favorite? Because it gives comic book fans a chance to do something that most comic book fans have probably dreamed about at one time or another. As a promotion for Amazing Spider-Man #669, Marvel Comics is going to give comic book fans the opportunity to appear on a variant cover. We're not quite sure on all the details yet, as Marvel just announced that fans should contact their local comic book shops for more information on this promotion. Retailers can find out the details from the Diamond Vendor Site or from the Marvel Mailer. The regular cover for Amazing Spider-Man #669 is by Humberto Ramos. The special fan variant cover will be by Todd Nauck. Amazing Spider-Man #669 is scheduled to be released in comic book stores on September 14, 2011.