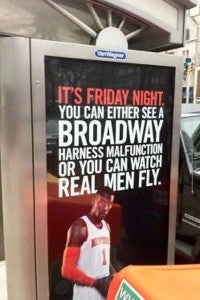 Earlier today, ESPN reported that the New York Knicks would remove a series of potentially-offensive posters from subways, bus stops and other locations around New York. The campaign has been completely scrapped after at least two potentially-offensive posters drew criticism, including one that made light of the highly-publicized technical problems in the Broadway musical Spider-Man: Turn of the Dark, which resulted in serious injuries to a number of actors late in 2010. "It's Friday night. You can either see a Broadway harness malfunctioning or you can watch real men fly," said the ad. Another read, "It's Friday night. You can either go out and attempt to pick up sixes and sevens or stay home and watch (Jason) Kidd dish out dimes." The MSG Network, who run advertising for the Knicks, announced earlier today that these ads would be pulled and apologized for any offense. Marvel, the owners of Spider-Man, recently teamed with The Knicks's cross-town rivals the Brooklyn Nets to create a superheroic mascot for the Nets.