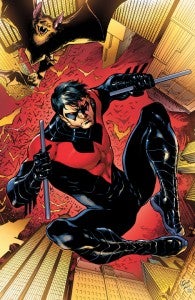 When Bruce Wayne stepped back into the role of Batman just before the end of Flashpoint, questions as to what would happen to his long-time crimefighting partner Dick Grayson certainly arose. Having been Robin, then Nightwing, and also Batman, what was next? Turns out, as we hear Dick say in the opening pages of this week's Nightwing #1, he missed doing this. We actually hear a lot from Dick in this issue, almost to the point of not much else happening. Most of the books in this opening launch have been doing a decent job of balancing the main character's narration with the action of the world and characters around them. However, Nightwing seems to relish the sound of Dick's voice. He has always been the chattier and more "colorful" of characters, known for his banter and quips alongside the brooding Batman, and even during his stint as the caped crusader, other characters noticed the change in demeanor. Here, for this particular issue, writer Kyle Higgins almost gives him too much to say. As Nightwing flies across the rooftops of Gotham City, his thoughts about his past and his life continually run through his head. Even as he faces off with a knife-wielding psycho in the trains of Gotham, Nightwing contemplates what he's been through and how it's shaped him. He even sees the old circus that he and his parents used to be a part of before they're deaths on the trapeze. We go from there to Dick's apartment and then he actually visits the circus, mainly to catch up with old colleagues and to see how they are. It's here that the books feels like it's trying too hard to get new readers and people who have never heard of Nightwing and have no idea who he is an idea of the character and his history. It takes a long time to get us into an actual narrative, which seems to involve a hired hitman going after Dick Grayson specifically. A quick dash into an alley has him changing into Nightwing, and the hitman doesn't even bat an eye. It's a little far-fetched to think that this guy didn't logically think about the possibility that Nightwing could be the guy he just tried to kill. It was literally seconds between Dick disappearing and Nightwing appearing. One of the several minor pieces of this issue that keep it from being a truly solid opening story. A few moments of battle ensue, and Nightwing soon finds himself facing down a guy who looks like Wolverine crossed with the Black Panther. Sorry for the Marvel reference, but it works best here! Once we finally get to this part of the story, it actually works pretty well, but it took quite a while to get there. When all is said and done, Nightwing #1 isn't that bad of a first issue, but it does take awhile to get some traction under it. For a character who is supposed to be one of the "lighter" characters in the Batman universe, this issue drags along for awhile, trying too hard to establish a history. I still think issue two would be worth picking up, however. Grade: B-/B

Nightwing #1 Review: Some Missteps for this Gifted Acrobat