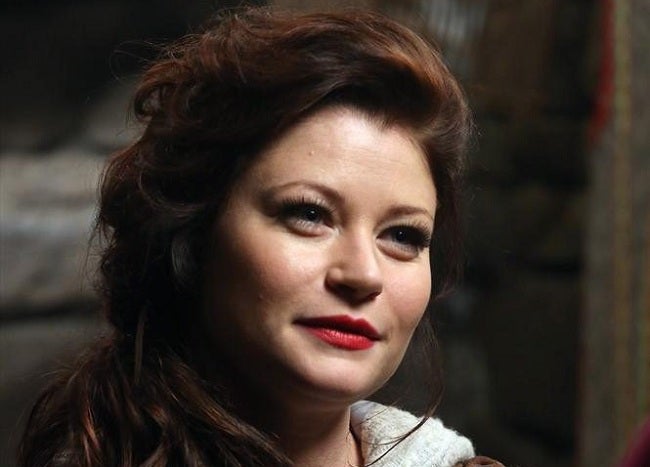 The next episode of Once Upon A Time, "Family Business," opens with Belle (Emilie de Ravin) dream, inside a flashback. She's dreaming about hiding from ogres, under a table, with her mother, before she wakes up and remembers that her mother is dead. Later, we learn that Belle doesn't remember the actual cause of her mother's death. She learns through research that there is magic out there that can help her remember, but her furious father demands she stay. Belle decides that she must pursue the truth anyway, at the one place where she might find the answer: Arendelle.

In Storybrooke, Emma (Jennifer Morrison)gathers the whole crew - Mary Margaret (Ginnifer Goodwin), David (Josh Dallas), Regina, Henry (Jared Gilmore), Rumpel, Belle, Killian, Robin, and Elsa to show them the video of young Emma when she apparently lived with the Snow Queen. The group takes David's advice that they should all split up, with Belle and Elsa (Georgina Haig) heading to the library to research. It's clear at the library that they won't find anything about the Snow Queen, Arendelle, or Anna, but Belle insists that Elsa keep her hopes up.

Emma, Killian (Colin O'Donoghue), Regina (Lana Parrilla), and Robin (Sean Maguire) find the Snow Queen's ice cream truck, where they find more evidence of the Snow Queen's Emma research, even before she was in Storybrooke. Regina storms away, frustrated that she cannot bring back Marion. She tells Robin that the only way to bring her back might be for him to fall in love with her again.

Emma and Killian go through the research in the car, where they learn that the Snow Queen was Emma's foster mother for six years before she changed her memories. The file even contains years of Emma's art projects, essays, etc., indicating that the two were probably pretty close. Oddly, they find some parchment with some kind of hieroglyphics.

Rumpel (Robert Carlyle) finds the Snow Queen (Elizabeth Mitchell) immediately, warning her that Emma is on her icy trail. The Snow Queen claims that she planned for Emma to find out about their past and asks what exactly he wants from her. He begins to propose one of his infamous deals before she cuts him off with a warning.

Meanwhile in an Arendelle flashback, Anna (Elizabeth Lail) returns to Elsa but does not tell her what she learned about their parents, who wanted to get rid of Elsa's powers. Elsa has been learning to control her powers under the guidance of their "aunt," the Snow Queen, but Anna is skeptical. She shares her concern with Kristoff (Scott Michael Foster) before heading off to discuss the long-lost family member with Grand Pabbie and the rock trolls. They don't realize that the Snow Queen is outside listening the entire time.

When Anna gets to Wandering Oaken's Trading Post and Sauna (the one from Frozen - "hallooo!"), she crosses paths with Belle, who's also on her way to the rock trolls. The two decline Oaken's sauna offers and head out together, sharing summaries for their reasons on the way. Before long clumsy Anna tries to climb a hillside, accidentally revealing the box she stole from Rumpel to Belle. She doesn't explain the box - only saying that she hopes Belle will never have to meet such an awful man.

Grand Pabbie already knows what Belle is looking for when they finally arrive at the rock trolls' home. He gives her a rock that, when stirred into a tea at the location where her memories were lost, will enable her to remember how her mother died. He tells Anna that her mother actually had two sisters, but they mysteriously vanished when young. Grand Pabbie erased the painful memory of the girls from the members of the royal family at their request. This leads Anna to regard Aunt Ingrid as shadier than ever. 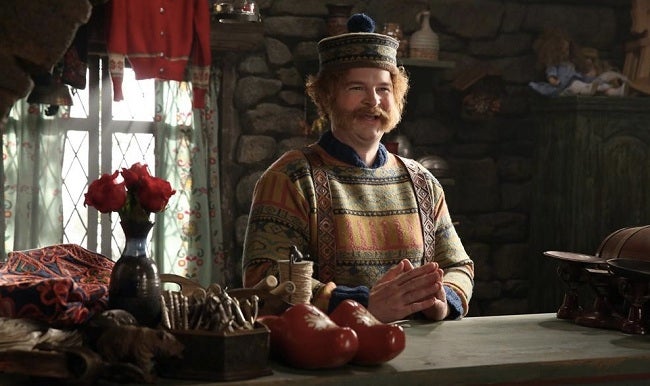 Anna and Belle are on their way back together when they're stopped by an elaborate storm, that Anna assumes was conjured by the Snow Queen. Thunder causes some of the rock they are standing on to slip, making Belle drop her rock and Anna to fall. Belle wastes her energy on reaching for the rock, which falls, before Anna falls too. The Snow Queen snatches up Anna and the box in her hand.

Anna awakes in a prison cell thanks to the Snow Queen, who thought that Anna was going to use the box against Elsa. When Anna asks her what happened to the third sister, the Snow Queen won't say. She re-iterates that all she wants is a family that will embrace her. This incident with Anna leads her to believe that Anna must be replaced by someone worthy.

Belle returns home to her father, who reveals that he does know how Belle's mother died. She sacrificed herself to save Belle, by standing between her daughter and the ogres while Belle was saved by the guards. Her father also tells her that the Ogre War isn't going well, and in return, Belle proposes that they summon a "powerful, powerful wizard" that she learned about on their journey - Rumpelstiltskin.

In Storybrooke, Belle wants to go after the Snow Queen herself and asks Rumple to help her. He doesn't want her to go at all, so Belle pulls out the dagger that controls him. At least, she pulls out what she thinks is the dagger that controls him. Rumple is forced to go along with the rouse that he started. They go to the Snow Queen's lair, where Belle says she must find a hat that strips a magical person of power. She goes inside and tells Rumple to keep watch.

Belle finds the magic mirror inside the cave, which now has her own face and voice. It mocks her arrival, bringing up the dark memories of when she let Anna fall. The mirror also hints that Rumpel is not as he seems, implying that the dagger isn't real. Rumpel then appears, saying the Snow Queen is on her way. He wedges himself between Belle and the mirror. When she slashes at him with the dagger, he teleports them back to the pawn shop. She crumbles, admitting to him what happened with her and Anna. He tells her that the dagger is real, and they express their love for each other.

Rumpel later goes to the Snow Queen to show her that he has the Sorcerer's Hat, giving him significant leverage for a potential deal with her.

Elsa, still at the library, has found a book that says the Snow Queen is her aunt. Killian points out that the other sister pictured looks just like Emma. Elsa reads the scroll they found, which contains a prophecy saying the savior will be named Emma and will become Ingrid's sister. Belle rushes into the room, reveals what she knows about Anna, and tells them all about the devious mirror.

Belle says that the mirror is part of a larger spell, the Spell of Shattered Sight, that would cause everyone in Storybrooke to turn on her. Everyone but Emma and Elsa, of course, leaving them to be Ingrid's two sisters - the perfect family.

Once Upon A Time Season 4 Episode 6 Recap With Spoilers: Family Business