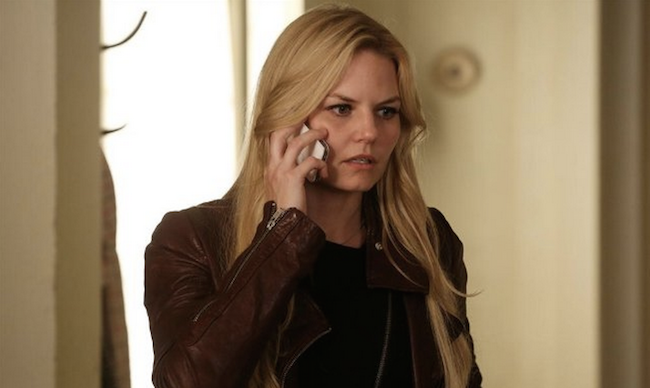 This episode, entitled “The Snow Queen,” begins in Arendelle with young Princess Ingrid and her two sisters, Helga and Gerda, as they are almost kidnapped by a man who wished to ransom the princesses. Though Ingrid saves them with her ice magic, she’s still terrified – of her own powers. The three girls make a pact that they’ll always be there for each other, tying matching ribbons on their arms.

In Storybrooke, Emma (Jennifer Morrison) shows Elsa (Georgina Haig) a spell that Belle found in a book, that the two of them may be able to use to neutralize Ingrid’s powers. They practice for a bit before Emma has to pick up baby Neal to babysit.

Mary Margaret (Ginnifer Goodwin) and Neal are at a nursery with Cinderella/Ashley (Jessy Schram) and some other local moms. Emma seems slightly jealous of Neal, and her emotions accidentally heat up a baby bottle in her hand. Next, David (Josh Dallas) calls to tell her of the icy trail leading to the clock tower – the trail of Ingrid, the Snow Queen (Elizabeth Mitchell).

Emma and Elsa run to the clock tower, finding Ingrid with her cursed mirror. They use the spell to bind Ingrid’s hands in cuffs of fire. Then, they interrogate Ingrid, who won’t tell them what happened to Anna, insisting that Anna would never understand them anyway. Elsa becomes too emotional, and Emma convinces her to leave.

In another Arendelle flashback, we see Ingrid and her sisters once they’ve grown. Helga (Sally Pressman) and Gerda (Pascale Hutton) prepare for a big party, but Ingrid decides to stay in, not wanting to risk Helga’s chances with a visiting suitor, the Duke of Weselton (Jonathan Runyon). She later peeks into the party, and her sorrow summons snowflakes. 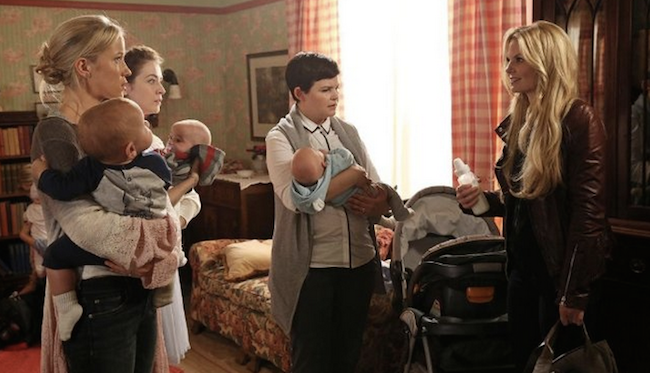 After the party, Ingrid says that Arendelle deserves a better queen, telling Helga that she must be the queen instead. Helga and Gerda refuse, and Gerda advises that they go see Rumplestiltskin (Robert Carlyle). The devious dealmaker gives Ingrid two things, a pair of gloves that will conceal the magic, and the bottle as a last resort. In return, they reluctantly give him the ribbons from their childhood that they still have tied on their wrists.

Some time later, the Duke of Weselton finds Ingrid and tries to kiss her. Just as she pushes him away with magic, Helga walks into the scene. The Duke tries to play it off like it was Ingrid coming onto him and not vice-versa, but Helga defends her sister.

The embarrassed Duke says he will reveal Ingrid’s secret to everyone in Arendelle, causing her to angrily shoot her ice magic at him. He pushes Helga into the blast and runs away. Having been hit, Helga slowly turns into solid ice before crumbling into pieces.

When Gerda sees what happened, she is terrified of Ingrid. She calls her a monster, grabs the magic bottle, and traps Ingrid into it. Next, she goes to Grand Pabbie, begging him for a memory potion so that she, and all of Arendelle, can forget about her two sisters, so that she may be a strong queen. He repeats Rumple’s mantra that magic always comes with a price, but agrees nonetheless.

Back in Storybrooke, Elsa, Killian, David, and Belle investigate the mirror only to find that it’s fake. They realize that Ingrid must have intended to get caught, so they run back to Emma in an attempt to save her. The door has been frozen shut by the time they return. They make their next stop at Rumple’s, where Henry now works, to get his help opening the door. He agrees, but Killian is suspicious of his intentions.

Ingrid reminds Emma that her parents gave her away, saying that they just use her for her powers. She claims that after just once accident, they will likely find her to be a nightmare. Ingrid even points out that they’re probably thrilled to have a new child who isn’t magical. Emma’s rage causes her to accidentally blow out the wall with magic, and Ingrid escapes.

When Killian and company meet up Emma near the explosion, she orders them to stay away. She’s no longer in control of her powers. Killian grabs her arm, forcing a surge of magic from Emma causing a street lamp to fall over, injuring David. The whole group’s initial response is fear. Emma runs away. 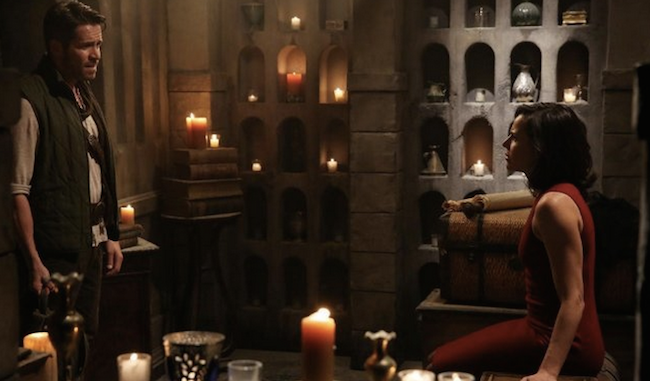 Elsewhere, Robin (Sean Maguire) visits Regina (Lana Parrilla) against her wishes, because he just cannot fall out of love with her and into love with Marion. Regina insists that saving Marion is the right thing to do and demands that he spent more time trying to fall in love with his wife.

Regina later flips through the story book, when Henry, who’s on his way to his new job, needs some help with his tie. Henry asks about Robin, and Regina say she’s ready to let him go. She reassures him that her new focus is finding the book’s author.

Next, Robin runs into Will Scarlet (Michael Socha) at the restaurant. They reminisce over drinks, with Will apologizing for his past. Robin says that it’s Marion that convinced him to steal only from the rich. Will advises that he go after love, since it’s so hard to find, whether or not it’s the “right” thing to do.

Robin visits Regina again. He says that today is the day when he breaks his code, embracing and kissing her passionately.

The episode ends when Ingrid visits Rumple, ready to make a deal in order to get back her ribbons. She knows that all Rumple truly wants is to be able to leave Storybrooke – to be able to leave, with his powers, and in essence, have everything. She says she’ll grant it to him, as long as he leaves Storybrooke to be hers. He agrees.

Ingrid leans in and whispers what he needs to do, he ominously responds that not only will he do it, he’ll do it “with great pleasure.”

Once Upon A Time Season 4 Episode 7 Recap With Spoilers: The Snow Queen