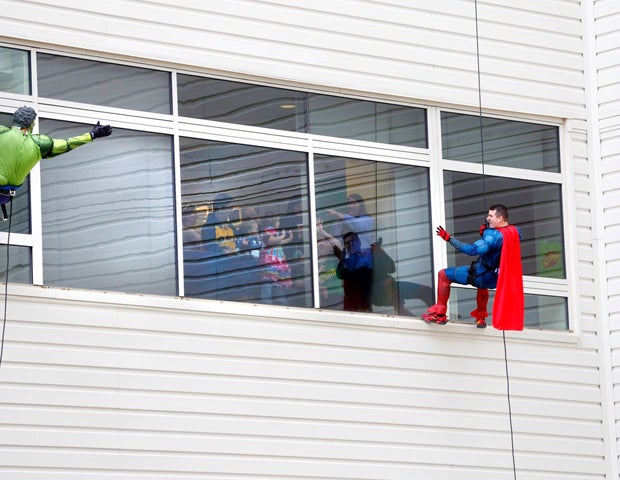 The children at ProMedica Toledo Hospital got some special visitors of the superheroic kind on Thursday.

For nearly a month, the staff at ProMedica and the SWAT team teamed up to develop a plan that resulted in a dozen superhero costumed officers rappelling down the side of the hospital, The Blade reports.

The officers were inspired after viewing videos and photos of window washers elsewhere dressed in costumes to surprise sick children. Officer Matthew Slaman says he was confident he and fellow officers could have the same results in Toledo.

"It was cool,"  Slaman said. "It was a lot of fun to see their faces light up, and hope it helps with the healing process."

For 8-year-old Nicholas Pinkstaff, the event was a special one that hit close to home.  Nicholas made repeated visits to Toledo Hospital in a long battle against leukemia. For each of visit Nicholas's father, Michael Pinkstaff, dressed as a different superhero while his doctor, Dr. Crawford Strunk, would play the villain: Darth Vader.

"He used the superheroes as a kind of way to get through his therapy," Mr. Pinkstaff said.

For Nicholas, pretending to be a superhero gave him the strength to ultimately beat leukemia.

"Superheroes kind of helped me a little," he said. "It helped me get through cancer because I stuck up to them."