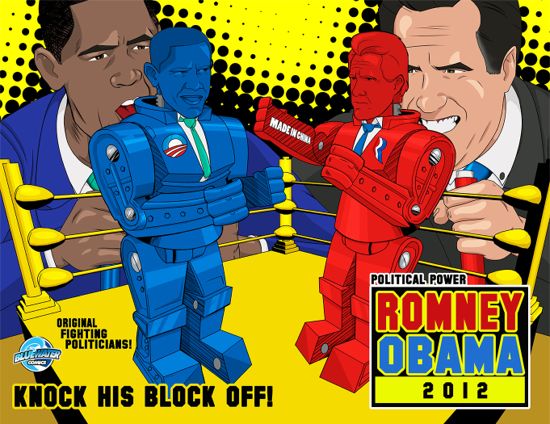 Both President Barack Obama and Mitt Romney have been featured in comic books in the past, but a new comic book by Bluewater Productions certainly has the most intriguing cover we've seen yet. In Political Power: Romney Obama 2012, President Barack Obama and Mitt Romney are shown fighting it out via a game of Rock Em' Sock Em' Robots. President Obama is the blue robot of course, while Mitt Romney is the red robot. According to Bluewater Productions, Political Power: Romney Obama 2012 will offer an extensive look at the backgrounds of both candidates. The comic book is being written by Marc Shapiro and Chris Ward with art by Jed Mickle, Azim and Nathan Girten. "Barack Obama and Mitt Romney have been taking jabs at each other for the better part of the year, so far. The intensity will only increase the closer we get to Election Day, as the stakes have never been higher," said Bluewater President Darren G. Davis. "We wanted to have some fun with the figurative boxing match that has been going on between the two candidates and, at the same time, educate readers on the two men fighting for the presidency." The special 40-page graphic novel Political Power: Romney Obama 2012 will be available in print exclusively at Comic Flea Market. Digital copies are available now through Nook, Kindle, and iPad.