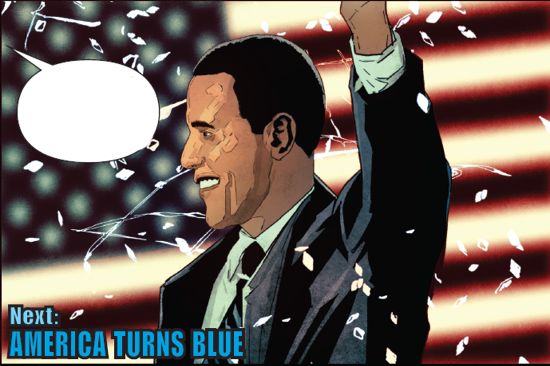 Remember when Barack Obama was elected President the first time, and it seemed like he was showing up in pretty much every comic book that was published. Amazing Spider-Man #583 was touted as an inauguration day special and featured the newly elected President Barack Obama on the cover. The issue was so popular that it went through so many additional printings that we lost count.

With President Barack Obama just recently winning his second term in office one might expect him to start popping up in comic books again. However, there doesn’t appear to be as much hoopla around President Barack Obama becoming the first African-American President to be re-elected. Whether in sports or politics, it seems like everyone likes to celebrate that first win, and no one cares about the subsequent wins, except for Todd McFarlane that is.

President Barack Obama will be making his first appearance as a second term President in Todd McFarlane’s Spawn #225. In order to have the issue ready to ship soon after the election, both an Obama Wins and a Romney Wins version of the comic was prepared. Comicbook.com has an image of President Barack Obama’s appearance which takes place in the final panel of Spawn #225. Don’t worry, the word balloon isn’t blank in the actual issue, we just removed the text to avoid any spoilers.

For all the President Barack Obama comic book completist out there, Spawn #225 arrives in comic book stores on November 21, 2012.