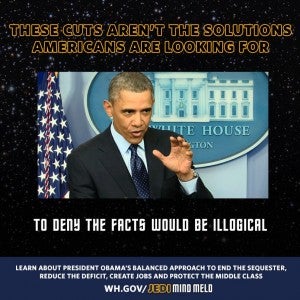 Following a gaffe a couple of weeks ago in which he confused terminology from Star Wars and Star Trek, then found himself mocked by fans on the Internet for a couple of days, U.S. President Barack Obama had a little fun with it today. As reported by The Hollywood Reporter, the President told reporters at the Gridiron Dinner, "After a very public mix-up last week, my communications team has provided me with an easy way to distinguish between Star Trek and Star Wars: Spock is what Maureen Dowd calls me. Darth Vader is what John Boehner calls me." This isn't the first time the White House has responded to the President's slip; the day it happened, they released the image at right, which playfully pokes at the President and links back to a position paper the Administration has posted on the controversy he was addressing when he misspoke.

"And in the words of one of my favorite Star Trek characters -- Captain James T. Kirk of the USS Enterprise -- 'May the force be with you,'" the President said.