Traditional print comic books are dead. D.E.A.D.  They just don't know it yet.  And the latest blow--one that could push print comics toward life support--was cast by Marvel Comics this past weekend.

Over the weekend, Marvel featured a unique sale: purchase a comic on the Marvel Comics app and Marvel would email you a $5 coupon that could be used at any local brick-and-mortar comic book shop.  Pretty forward thinking, right?  Here's the quote from Marvel regarding the promotion: “As we continue to grow the digital comics world, we want to make sure it’s always to the benefit of the medium and our comic shop retail partners,” said Peter Phillips, Senior Vice President & General Manager, Marvel Digital Media Group. “This coupon is a great way for us to let more of our fans know about their local comic store and incentivize them to make the trip there. At the end of the day, our goals in the print and digital mediums are the same—bring more fans to comics.”

As far as straddling the line of pushing in-house digital comics vs traditional brick and mortar (BAM) old school print comics, Marvel has done a pretty good job the last couple of years.  From releasing same day digital as the same price to other pushes to help BAMs, Marvel has shown a genuine willingness to keep physical copies alive and support local shops.  I think their approach has been fantastic.  However, the $5 coupon offer makes me pause.  Why?  First of all you have to buy the digital comic from MARVEL--and only Marvel.  Not from ComiXology or another site that offers digital versions.  That means Marvel is the one getting a new account.  Or getting repeat business.  They're pulling sales in-house.

Secondly, the 'let more of our fans know about their local comic store' is a smokescreen.  Everyone knows that digital sales are currently well behind print sales.  An overwhelming majority of buyers go to their local shop.  Offering a coupon for $5 isn't going to push more folks to local. The coupon is there to get people to TRY digital, knowing that A, if they don't like it now, Marvel has an account (and email address) to market to them, and B, if they do like it, a new digital customer is born. 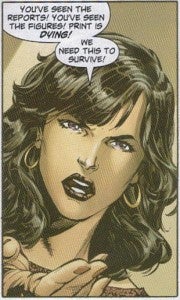 Again, I'm not knocking Marvel.  Other publishers are doing similar things right now.  The industry is at a crossroads, and unlike other industries, I think comics will transition to digital much more smoothly.  As someone who has spent the better portion of a decade on both sides of ecommerce--both the wholesale/manufacturer and the retail side--I can see the dilemma.  It's one that has become prominent everywhere.  In the past, you had a wholesaler and you had a retailer. Both knew their places.  The wholesaler produced the product and sold it to the retailer, who in turn sold the product to the end user.  Then came the internet.  It took a few years, but we started seeing a shift in the paradigm.  More wholesalers began to sell direct, and more retailers began to skip wholesalers and sourced product on their own.  In a lot of cases, it got ugly.

And that's the shift that is occurring in comics.  If you're Marvel or DC, you want to cut out the middleman. You save on margins, you save on overhead, you control more of the process.  Heck, if you're an independent publisher, you DON'T WANT the middleman.  Diamond and other distributors are your enemy.  You want an even playing field where you can attract new customers.  And if you aren't big enough to get a sniff from a distributor, your chances of succeeding are very slim.  You want digital to take off--and now. You don't want to cut your profits by paying a distributor, and you don't want a BAM that might or might not push your product--or even order it.

But wait, you say, without a middle man and a local comic book shop, how will people know about new comics and other comics that they might want to read?  The recording industry asked the same thing about 10 years ago.  Local record shops were closing left and right, giving way to big box retailers and online sites. You know the ones I'm talking about--the place where you could walk in, tell someone you liked artist A and they'd give you four other artists/groups you should try.

The industry panicked.  What would happen? Well, satellite radio happened.  If you have satellite radio, think of how many different bands, artists or genres that you've been turned on to that you never would have heard of through the radio or a local record shop.  I bet it's in the dozens.  You know what else happened?  Pandora.  The amount of new music I've gained through Pandora is simply uncountable.

With television, there was Netflix and their recommendations. And that's what will happen with digital comics.  Someone will figure out a way for you to find new comics that you'll love.  You'll be okay--and probably better off.  Change happens, and this is one change that is inevitable.

Besides, digital comics should end up LOWERING costs. After all, there is ZERO marginal cost on a digital comic.  That can't be said for a print copy.  It cost the same to make the 1,000,000th digital copy as it does to make the 2nd one.  And margins will be higher because there won't be a middleman in the process.

It's coming, and soon.  Have you read a comic book on a tablet?  One word: AWESOME.  Better, brighter graphics.  Easy to use, and you can take it with you everywhere.  The only down side of digital comics is that the tablets aren't quite big enough yet.  But larger tablets are coming, and when they do, it's all over.  I have a neighbor that swore she'd never read a book that wasn't a print copy.  Now she owns both a Kindle and an iPad.

Kudos to Marvel for not shying away from the future.  Now if they'll just lower those digital prices...

Dragon Ball Super: What is the Name of Vegeta's New God Form?