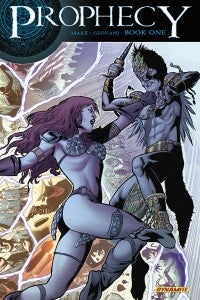 Dynamite Entertainment today announce that the first issue of their new crossover event miniseries Prophecy sold out at the Diamond Comics Distributors level today and that they would rush out a second print soon. The series, which revolves around a diverse army of Dynamite's characters (including Vampirella, Red Sonja, Dracula, Alan Quatermain, and the ReAnimator) gathering to combat the end of the world as foretold in Mayan prophecy, will come back next month with a new cover (seen at right). "Obviously it's great news that Prophecy #1 sold out," said Prophecy writer Ron Marz in a press release. "It's satisfying to put together a series that embraces the fun of comics, and then have readers respond to that series. But the better news is that Dynamite is going back for a second printing. We want to have copies in front of as many people as possible!" ComicBook.com's review of the issue will be up later tonight, followed by an interview with Marz tomorrow.

Prophecy Sells Out, Coming Back For Second Printing