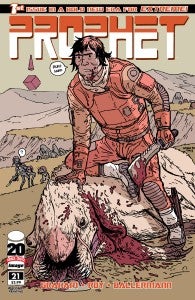 Since this appears to be a Rob Liefeld day, let’s hit some more news regarding the man.  As you might know, Image Comics is doing a complete relaunch of Liefeld’s Extreme titles.  So far, the titles are doing well.  But an announcement today tops them all.

The initial run of ‘Prophet’ #21, the re-imagining by Brandon Graham and Simon Roy, has already sold out at the distribution level.  The book isn’t scheduled for release until Wednesday, and a 2nd printing has been ordered.  That’s a REALLY good sign for the industry.  The best part?  Image thought a sell-out was coming. "This is one of those situations where I hate to say something as glib as 'We told you so,' but in the nicest way possible: We did," said Image Comics Publisher Eric Stephenson. "There's been review after glowing review, along with rousing endorsements from the likes of Warren Ellis – it's not a secret Brandon and Simon have turned in a brilliant first issue.”

Kicking off an all-new era for Rob Liefeld's Extreme titles, PROPHET #21 opens with John Prophet awakening from cryosleep in the distant future on an Earth that has been inhabited by alien settlers. His mission is simple: Re-start the human empire. Critically acclaimed KING CITY creator Brandon Graham heads up the visionary new creative team on PROPHET, with up and coming artist Simon Roy (JAN'S ATOMIC HEART) providing the breathtaking visuals. The first issue features a painted cover by Russ Manning Award winner Marian Churchland (BEAST, ELEPHANTMEN), plus a variant cover by Rob Liefeld. The second printing cover will feature an all-new image by Roy.

"I'm really looking forward to being able to do all the barbarian science fiction ideas we've got planned for this series,” said Graham. “The freedom Rob and Eric are giving us to take this character and run off the board with it has been fantastic."

‘Prophet’ #21 hits shelves this Wednesday, January 18th.  Better run out and snag a copy, or you’ll have to wait a month for the second printing.