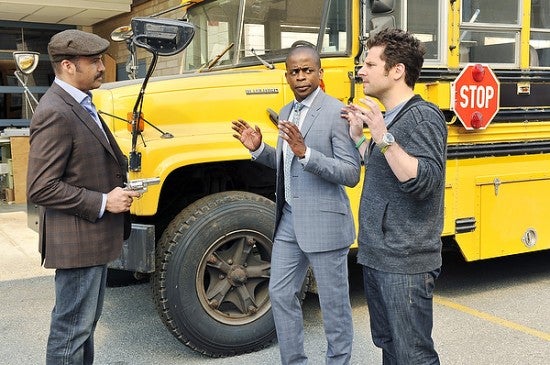 It's true: Billy Zane is hard to top. Psych, the USA Network dramedy which airs its series finale on Wednesday night, has been chasing the Twin Peaks and Titanic star for years, and Zane -- well aware of their affection for his work -- has been trying to make it work almost as long. Back in 2010, series star James Roday co-wrote "Dual Spires," a Twin Peaks-themed episode that brought back a number of performers from the iconic series to guest star on Psych...and Zane was nowhere to be seen. Roday told me at the time, "We just have the worst luck with Billy. He actually knows what big fans we are and I've actually become friendly with Billy in the course of our many attempts to get him up to Vancouver. We just can't seem to work out an episode with him being free. He would love to do the show and we would love to have him. We just can't seem to work out the schedule but luckily there's another whole season, so…fingers crossed." It wasn't that season -- or even the next -- when they got Zane, but it eventually happened, and the Titanic star will be aiming his gun at Shawn and Gus on Wednesday's finale, titled "Break-Up." You can check out a 30-second TV spot for the episode below; it airs at 9 p.m. EST on USA, followed by an hour-long fan Q&A called the Psych After Pshow.