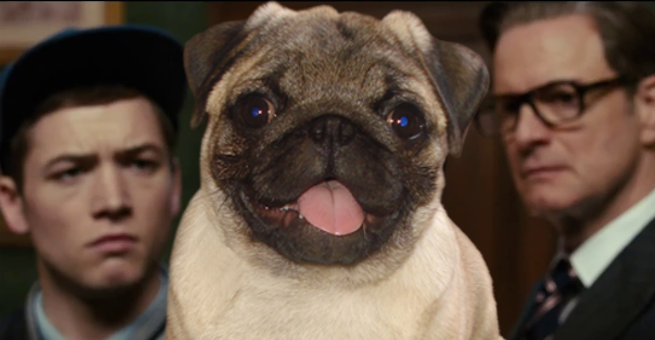 Harry Hart (Colin Firth) recruited Gary "Eggsy" Unwin (Taron Egerton) to join his spy agency. Before he can become an agent he most complete his training, which involves picking a puppy to train. It is a learning exercise, but Eggsy gets off to a rough start when he mistakes the breed of dog he has chosen.

Funny enough, in real-life Taron is actually afraid of dogs. "I like dogs, I just don't choose to spend time with them," Taron confessed to The Belfast Telegraph "You know what, it's something I've really only admitted to myself in the last couple of years: I think that I'm a bit scared of them."

KINGSMAN: THE SECRET SERVICE - Based upon the acclaimed comic book and directed by Matthew Vaughn (Kick Ass, X-Men: First Class), Kingsman: The Secret Service tells the story of a super-secret spy organization that recruits an unrefined but promising street kid into the agency's ultra-competitive training program just as a global threat emerges from a twisted tech genius.

Pug Puppy Will Steal Your Heart In Clip From Kingsman: The Secret Service

Today's Wordle Is a Hard One