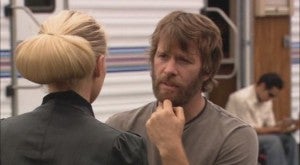 , Frank Darabont's upcoming TNT series starring former The Walking Dead actor Jon Bernthal, just got a little more comic book street cred. Thomas Jane, who has played the Punisher and written his own comics, will join the cast of the primetime drama, reports The Hollywood Reporter, but there's a catch.

According to the story, Jane wasn't available to shoot the pilot--which also stars The Walking Dead's Jeffrey DeMunn, Heroes' Milo Ventimiglia and of course Simon Pegg as the pilot's villain--but will join the cast if the show should be ordered for a full season, which most insiders are expecting to happen.

L.A. Noir tracks the conflict between Los Angeles Police Chief William Parker and mobster-and-former boxer Mickey Cohen, and is set during the 1930s. Jane, fresh off the cancellation of his fan-favorite HBO show Hung, will reportedly play Bugsy Siegel in the show.

Dexter Teaser Sets Up the Serial Killer "Getting Back to Nature"