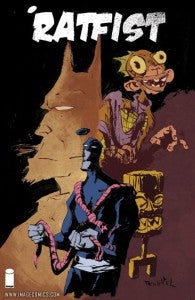 Doug TenNapel, who is best known as the creator of Earthworm Jim, has been building up quite a following for his Webcomic Ratfist. Now, Image Comics will take Ratfist from the online world into the print world in December.

Ratfist was originally conceived as the type of character that might appear on Cartoon Network, but TenNapel launched the series as a daily-updated Webcomic instead. TenNapel writes and draws Ratfist with coloring help from Katherine Garner.

Ratfist features a vigilante-in-tights. In the series, TenNapel satirizes comics, politics, philosophy, and even himself. The Ratfist graphic novel from Image Comics will include the entirety of TenNapel's RATFIST story, along with a forward written by MST3K/RiffTraxx's Michael J. Nelson and new pinups by Ryan Ottley, Skottie Young, Christopher Hastings and Ethan Nicolle.

"I'm so thrilled that this can join the line up of books I've brought to Image," said TenNapel. "I hope those that missed it when I was publishing online get to pick it up now in print!"

The Ratfist graphic novel will be 176 full-color pages and is scheduled to arrive in comic book stores on December 14, 2011. Other graphic novels from Image Comics by TenNapel include Flink, Tommysaurus Rex, Creature Tech, Gear, Iron West, Earthboy Jacobus, Black Cherry, Monster Zoo, and Power Up.