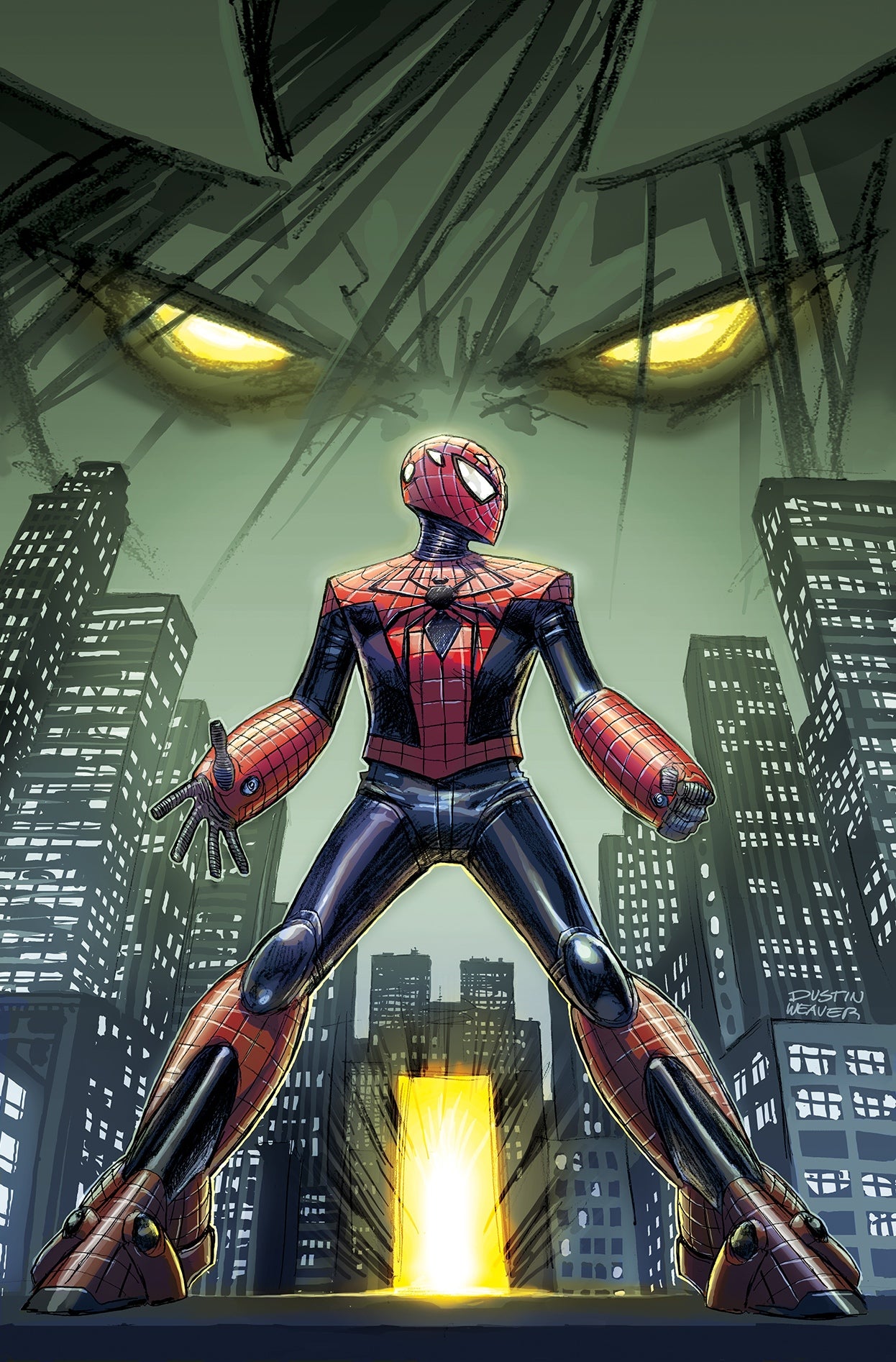 The concept behind Edge of Spider-Verse is simple: create a radically different version of Spider-Man and tell a story in twenty pages. That's a very compelling conceit, to reinvent one of the greatest superheroes of all time with very few restrictions. It also means that creators have to include a lot of information in very limited space, and focus it all into a self-contained story. Last week's Edge of Spider-Verse #2 showed the great potential that could be found in this idea. Edge of Spider-Verse #3, on the other hand, reveals how easily it can all go awry.

Dustin Weaver introduces the issue across almost five pages of exposition. The extended setup leaves the comic lacking momentum, but at least establishes a robust backstory for Aaron Aikman, The Spider-Man. Many important elements are still missing by the end of page five though. The introduction provides a sense that this story may be occurring in Japan, but never actually establishes a setting. Many panels feature a cityscape, but its architecture is so generic that it's impossible to identify The Spider-Man as belonging to a specific place. Multiple Japanese motifs feature prominently in the story, but Aaron remains a white man. Weaver seems unwilling to commit his story to a single location.

The exposition also features Marvel trading cards to introduce two of The Spider-Man's villains, one of whom never features into the actual story. It's a fun element that goes well with this highly accessorized, Mecha-inspired version of Spider-Man. The infusion of pop culture makes for some amusing panels, but is tonally jarring set side-by-side with the plot of this comic. The quirkiness of these elements are at odds with much of the drama.

This story is not a light hearted Spider-Man romp, it bears a closer semblance to a horror movie. The antagonist plays on Aaron's most personal relationships and evolves from the death of a child. It's a deeply disturbing origin for an equally disturbing villain. The conclusion of the issue is dark. It's also confusing as the story logic of the preceding 19 pages can't make sense of the final one. In order for that to occur, readers will have to rely on outside knowledge of the Spider-Verse event itself. The horrific tones of this conflict are lost when Morlun appears like some sort of diabolus ex machina (devil from the machine).

Edge of Spider-Verse #3 seems like it is capable of becoming a lot of things. It could be a manga-inspired Spider-Man tale, or one that infuses pop culture references on every page, or a dark, horror riff. Instead of being any one of these things, it chooses to be none of them. There's no clear conceit to this story. In attempting to be many things at once, it loses any rhythm it has and becomes noise.

All of this is unfortunate because there are still some genuinely thrilling elements to this comic. The design of Aaron's suit is excellent. The bulky forearms and boots provide an odd sense of balance. Weaver's dissection of the various components makes you want to see each of them in action. In a two-page spread, he shows off the design combining the typical grace of Spider-Man with mechanical power. He blends elements of the Mecha genre into the Spider-Man mythos seamlessly.

There's no compelling story for this Spider-Mech to be involved in though. An overabundance of exposition, a lack of clear setting, and various extraneous elements all worked to push me between bewilderment and weariness. There are things to like in Edge of Spider-Verse #3, but they're lost in the confusion of this comic.