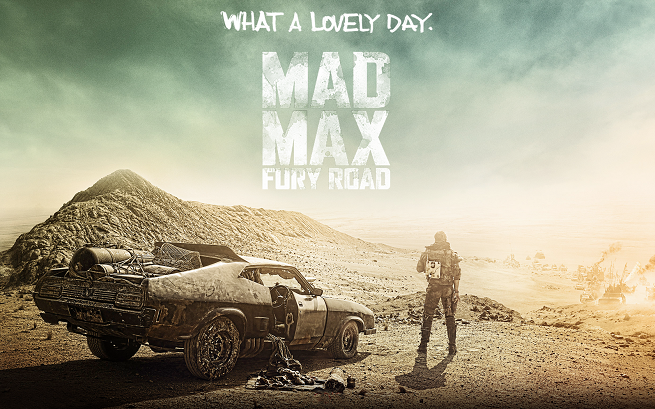 Mad Max: Fury Road is a beautiful and terrifying post apocalyptic opera. Returning to the world he first created in 1979's Mad Max, director Director George Miller delivers another riveting tale of survival and redemption. In this dark dystopia, all who haven't succumbed to disease or despair fight for the limited resources left to them. Those with the will to survive have banded together in small tribes or towns to control what little they can. Order is chaos, law is death. Women are prized for their ability to breed, while uninfected Men are used as living blood banks. And those ruthless enough to assume power control the cities of Gas Town, Bullet Farm and the Citadel with fear and violence. Welcome to the world of Mad Max.

While not a reboot, nor a direct sequel to 1985's Mad Max: Thunderdome, Fury Road is certainly a spiritual successor to the Mad Max franchise. This installment's goal wasn't just to revisit Max, but to reinvent him within the same, yet far rawer, post apocalyptic realm. Max isn't just angry in this film, he's absolutely mad. He has suffered the ultimate loss of his family, his world and his sense of self--and it shows.

Tom Hardy steps into the Wastelands as the vengeful Road Warrior; a role that didn't come without it's challenges. As a bit of backstory--Hardy wanted the blessing of the original wastelander, Mel Gibson, and sat down with the actor before assuming the flame thrower. That was the easy part - then Hardy had to become the man who yearned to return to a home that no longer exists. "He's seen a tremendous amount of trauma and horror, and everything he cares about is lost," Hardy said in a press interview. "But even though his life, in many ways is not worth living, there's an argument to defy death."

Standing toe to toe with Max throughout the film is the Imperator, Furiosa - a completely new character, and an unapologetic leading female unlike any we have seen on screen since Sigourney Weaver's Ripley in Alien. She's a complex character that only an actor of Charlize Theron's calibre could fully realize. "She is an anti-hero in the classic sense," Theron states. "She's driven by very human flaws. For me, what sets her off is that she has had enough of feeling worthless as a woman in a world where women are only good for one thing, and that's procreating."

Furiosa has muscled past her role as a breeding machine, and controls the great War Rig, a mobile war machine and the prized vehicle for the Warlord of the Wasteland, Immortan Joe. While on a supply run to Gas Town, the great Imperator deviates off course with a cargo more precious than water, which puts her directly in Max's path. It is their need to survive that brings them together as allies, at best. As Theorn says, "There is no room for relationships in this place."

Furiosa is a Road Warrior, and in many ways the star of Fury Road. While Max is a lost man who seeks vengeance, Furiosa wants redemption. There is no trust when the two first meet, it builds slowly as they race along the wastelands, trying to outrunImmortan Joe and his War Boys. Eventually, through Furiosa's past and pain, Max eventually rediscovers hope.

But perhaps the most outstanding character was newcomer Nicholas Hoult's Nux. The white painted War Boy and his fanatical dedication to Immortan Joe illustrates just how far society has fallen. Nux's ability to find true joy in his moments of half-life brings a uniqueness to this character in a world where no one smiles. From huffing chrome spray paint before throwing himself into battle to what comes later, Nux is the one character to truly transform through Fury Road's many trials.

Dialogue is as sparse as clean water in the Wastelands. It's Theron and Hardy's ability to push the story forward with their actions, their intent spelled out with each calculated move, and Miller's craftually articulated direction that guides viewers the ride. Initially Miller intended the only audio, outside of dialogue, to be the noise of the engines and the utter void of their surrounding. It wasn't until he met with composer Tom Holkenborg, after principal photography had wrapped, that the score was composed. So much of this film is driven by the music, it is hard to imagine the movie without it. There are even distinct acts, set apart by deliberate silence and a fade to black that further sells this as more than your typical action flick, it's something far more ambitious. It is a modern day rock opera.

While this is a film of minimal story and maximum action, it works because so much is explained through the visual dialogue. It's 120 minutes of near non-stop car chases, exaggerated fight scenes, and fearless momentum. Mad Mad Fury Road sets a definitive tone in the revival of this franchise and places the bar quite high for the rest of the summer movie season.