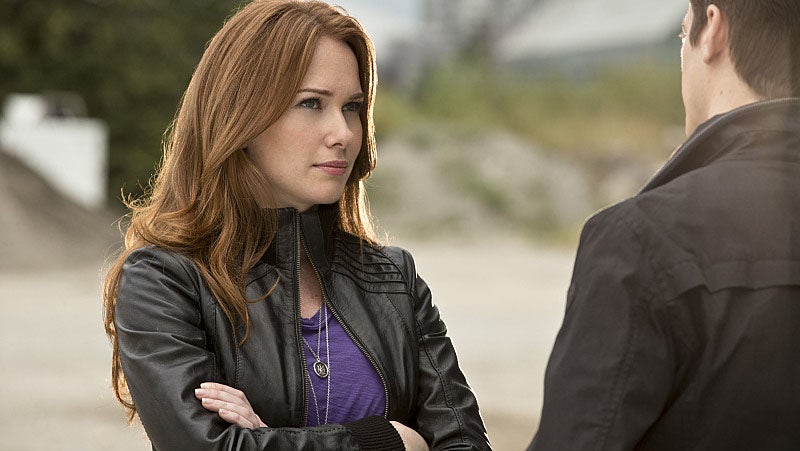 Starting this week I will be taking a look at the first season of The Flash for ComicBook.Com. I’ll be here every Wednesday morning (or Tuesday night if things go well) to take a look at new episodes, examining what worked and what didn’t. I’m hoping to foster a community here on the site, so make sure to jump into the comments section and let me know what you thought as well. We are already five episodes into the season, so I’ll quit delaying and dive into “Plastique”.

This week introduced another metahuman of the week, a character to drive a forty-four minute story before disappearing forever. This time around it was Bette Souci a.k.a. Plastique played by Kelly Frye. Bette is a veteran who has been cursed with the power to explode anything she touches. Her plight ropes in some shadowy military figures including General Wade Eiling played by Clancy Brown in addition to the regular STAR Labs crew. Although the introduction of Eiling may serve some long term plans, the basic structure of the show is starting to wear thin. The formula of discovering a new metahuman, attempting to help or stop them, and ultimately watching them die has been used three times in only five episodes. At this point the central plot of “Plastique” has become forgettable outside of the introduction of two future antagonists.

Frye’s performance as Plastique certainly doesn’t help matters. In most of her scenes it appears that she is at an initial reading rather than actually trying to give a performance. By the time it becomes clear that she will not become a recurring character, that seems like a blessing for the show. Her flirtation with Cisco and internal conflicts are painful to watch. Brown on the other hand plays up his role as an ultra macho, pulpy villain and has a lot of fun on the screen. We can only hope he resurfaces as a recurring antagonist (hopefully with tusks as The General).

In addition to the flirtation in Star Labs, “Plastique” primarily centers its drama around romantic relationships, specifically the lack of one between Barry and Iris. This has been a problematic component of the show since its pilot and one that was only made all the more obvious in the previous episode “Going Rogue”. In a pair of scenes between the two characters tonight, one with Barry as The Flash and another as himself, it becomes clear that there is absolutely no chemistry between the two actors.

There is an interview scene that is bound to draw comparisons to Superman: The Movie. Although Candice Patton makes it clear that Iris is fascinated with this mysterious hero, there’s none of the magic or romance present in the classic film. She and Barry never connect in a romantically appealing fashion. As the show continues to follow this plot thread, it’s becoming more and more problematic. It’s clear that the connection simply is not there, but scripts continue to focus on it as if trying to draw blood from a stone. These scenes are becoming increasingly tiresome, moving from tedious to actively annoying.

That’s not to say that there isn’t chemistry within the cast. “Plastique” features a variety of scenes where characters are shown simply enjoying one anothers company and it’s a lot of fun to watch. The episode opens in a bar where all of the younger members of the cast are playing darts and testing how much Barry can drink with his super fast metabolism. There’s not much to the scene, but it’s a delight to see these actors interacting and having fun. Watching Joe West crack up and smile when Barry reveals a new use of his powers was enough to place a giant smile on my face.

It’s clear that this cast works well together and can play off of one another. One of the greatest strengths of The Flash is that it is fun to watch. It is capable of easily evoking humor and a sense of play. These lighter moments also help to ensure that the darker ones resonate. Even with Frye’s lackluster performance, her death at the end of the episode is lent gravitas by the fun and laughter that preceded it.

“Plastique” is a rough episode to start this series on. It is forced to follow the best episode of the season thus far and focuses on the weakest element of the series. However, there’s still a lot of charm to be found in this cast and, even with some lackluster performances and rote plotting, it’s generally a pleasure to watch.