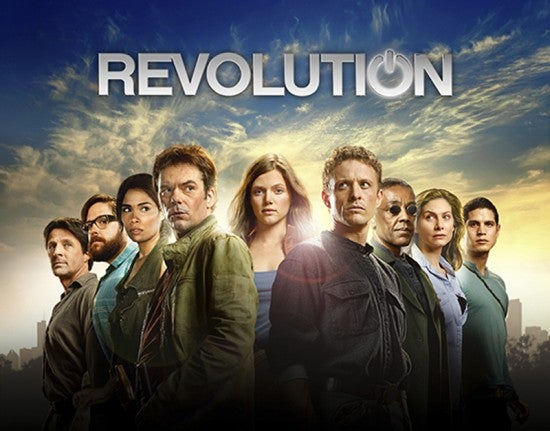 It seems the revolution will not be televised. The post-apocalyptic drama Revolution, which just wrapped production on its second season, will not return for a third after NBC cancelled the series yesterday. Developed in part by Star Wars Episode VII director J.J. Abrams and with a pilot directed by Iron Man 3 helmer Jon Favreau, the series got off to a quick start in 2012. It was the centerpiece of NBC's upfront presentation and had a massive presence at San Diego Comic Con International, before debuting to very strong numbers. Word-of-mouth was never great on the series, though, and reviewers didn't love it enough to pump it up the way they have for shows that have similarly struggled with audience retention. It wasn't much of a surprise when it got renewed for a second season, since the network had so much invested in it, but it would have been a much more surprising development were it renewed for Season Three. Don't be surprised to see a fan campaign to bring it back via Netflix, Hulu or even as a comic book in the hopes of getting some answers if the season finale doesn't provide real closure to the series' lingering mysteries. J.J. Abrams also produced Believe, which was cancelled by NBC yesterday, and FOX's Almost Human, one of the earliest cancellation announcements of the season back on April 30. Revolution villain Giancarlo Esposito, who was featured in the recently-concluded Breaking Bad and had a minor, recurring role on the also-recently-cancelled Community, could appear on the Breaking Bad spinoff Better Call Saul. His next job, though, is in the upcoming Batman: Assault on Arkham animated feature film.