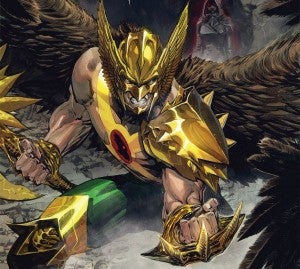 Following reports coming out of the Amazing Arizona Comic Convention this weekend that DC Comics will soon announce the cancellation of The Savage Hawkman, Image Comics co-founder Rob Liefeld, who used to write that comic, took to Twitter to suggest what fans might expect to replace the title in DC's lineup. "Wait, you mean that wonderfully well promoted and marketed Savage Hawkman comic was CANCELLED??? shocking! Shadow Thief didn't save it?? Look for a Red Robin, Martian Manhunter, Superman/Batman, DC Comics Presents and Brave and Bold to enter the 52 arena sooner than later," Liefeld said. That would require a few more cancellations, although DC Comics Presents or The Brave and the Bold could easily replace the recently-cancelled DC Universe Presents. It's unclear whether Liefeld was discussing projects that were in development while he was at DC last year, or whether these are just educated guesses from someone who's been around the block a few times. Superman/Batman was reportedly in development at some point with Brad Meltzer and Bryan Hitch for the New 52, and Martian Manhunter--now just called Manhunter--has a monthly backup feature planned for Justice League of America. If The Brave and the Bold followed the "Batman and someone else" format that seems to be the expectation for that title, it would likely be the safest bet of the bunch, since the Batman family of titles have been DC's most predictable successes for years now. For that same reason and others (Tim Drake carried a title for longer than any other newly-created DC character in recent memory), Red Robin seems like a no-brainer. There is, of course, the additional matter of the R.B. Silva artwork that started circulating online this weekend. For two weeks, the Brazilian-born Superboy artist has been slowly leaking pictures from something he "can't talk about," which includes Booster Gold, Hawkman, Shazam, Firestorm and other characters. If one were to make a shortlist of titles ripe for cancellation, The Fury of Firestorm the Nuclear Man would have to be at least considered, given the fact that it started out a huge disappointment (expectations were impossibly high with Gail Simone and Ethan Van Sciver working on it, but still). Dan Jurgens and Ray McCarthy have righted the ship creatively and seem to have stopped the bleeding in terms of attrition, but whether or not the book can survive without a major infusion of new readers is hard to say. DC Comics has yet to confirm reports that The Savage Hawkman is cancelled, or what issue might be its last if it were.