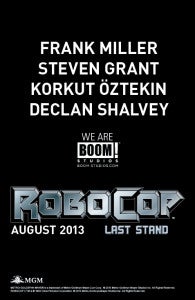 Coming in August, Boom! Studios have just announced the release of a project titled RoboCop: Last Stand, featuring work from legendary comics artists Frank Miller and Steven Grant, as well as Korkut Öztekin and Declan Shalvey. It's not clear what the breakdown of the work will be; it wouldn't be surprising if, as he's done a number of times in the past, Miller simply provided covers. He's credited first on the poster, which may suggest that the Sin City creator has a larger role than that. Miller is credited with working on RoboCop 2 and RoboCop 3, as well as video games based on the third film and his comic book miniseries RoboCop Vs. The Terminator. Both Miller and Grant have written RoboCop comics in the past, and Grant wrote an introduction for an Avatar Press collection of Frank Miller's RoboCop. 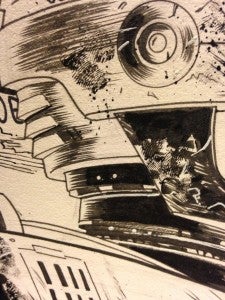 Shalvey recently tweeted the teaser at left, saying that it's what was on his drawing board at the time. At least one fan immediately identified the project as RoboCop but no press seemed to pick up on the spot. Of course, right now they're filming reshoots for next year's RoboCop reboot, which was originally set for a 2013 release before it was pushed back. With a planned April release date next year, it's likely that a six-issue comic book series beginning in August wouldn't be released in trade paperback until the movie was in the theaters, and that if it sells particularly well a follow-up could be timed to coincide with the release. There's an outside chance that the Miller and Grant material could be archival stories, as well; when Boom! recently teased a Grant Morrison Avengers story (based on the English TV series, not the Marvel comic), it turned out to be a reprint of a decades-old story which was used to lead into the current, new Steed & Peel material being released by the publisher.