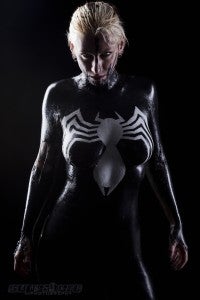 For the second time in two days, Adam Jay's Superhero Photography Facebook page is under attack by complaints from users who object to a photo of model Freddie Nova as Venom, the popular Spider-Man villain.

The costume in question is liquide latex, providing the same effect as the special effects in the X-Men movies have done for Mystique over the years. Yesterday's image showed Nova being "taken over" by Venom's alien symbiote, an effect that left her breast partially exposed, which was assumed to be the issue. This time the image, shown at right, doesn't feature even partial nudity, only a skintight costume.

Today, Facebook has levied a suspension on Jay, so that he cannot post for 24 hours on his Facebook page; as such, Nova issued a statement on his behalf, which reads in part:

OK so I've just had ANOTHER Facebook warning regarding one of the images I've posted !!! I mean seriously what is wrong with some people ! So basically if this happens one more time then the likelihood is, I will be deleted permanently.

To those who are offended by any of the stuff I have posted, it's a shame you couldn't grow a pair and speak to me about it or even better you delete me/unsubscribe etc.

It's probably not surprising, after yesterday's outpouring of support over the first banned image, that those objecting to Jay's photos would rally. As often as not, especially if the objection is based in principle or religion, it seems that a broad base of support only further antagonizes those making the complaints. Whether they speak for the masses seems questionable, though; Jay's site gained nearly 1,000 fans between the time ComicBook.com wrote our first story on the issue yesterday and the time we learned of the second image.

Representatives for Facebook did not immediately respond to an e-mail request for comment. If and when they do, the story will be updated to reflect their response.