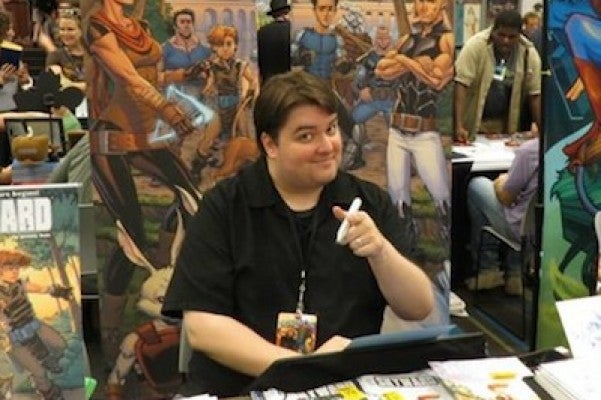 Jeremy Dale, writer and artist on the acclaimed Action Lab series Skyward, has passed away. He was 34.

His passing was sudden and unexpected, and a GoFundMe page has already been created -- and generated more than $5,000 in a few hours -- to help his family deal with expenses. There is a second one here, and the two are supposed to be merged soon, so if the top link doesn't work, try the next.

News of Dale's passing started to make the rounds this afternoon on Facebook when his wife, Kelly Dale, made a statement (reprinted in part below).

It is with great difficulty that I share with you this awful news. Late in the evening of November the third, my husband Jeremy Dale passed away. He was hospitalized, and surrounded by his friends. His doctors say he passed without pain or suffering.

Jeremy’s passing was sudden, and a shock to everyone. The delay in sharing this sad news was so that we could contact Jeremy’s family and close friends. Final arrangements are still being made, and will be shared on Jeremy’s Facebook page as details come together.

Jeremy loved you all very much- he appreciated your support and your friendship. Thank you so much for your understanding during this very difficult time.

There has been a massive outpouring of grief and affection from the comics community; Dale was well-liked and a noted advocate of all-ages comics, something many creators champion quietly.

Prior to Skyward, Dale worked on Popgun, G.I. Joe: A Real American Hero and NFL Rush Zone, among others. He lived in Atlanta, Georgia with his wife, Kelly, and their dog, Kirby.

Our initial story related that reports of Dale's passing were circulating this weekend. We regret the error, which was based on a misdated report we encountered during research for the piece. That article, and ours, have since been updated.

Skyward's Jeremy Dale Has Passed Away At Age 34