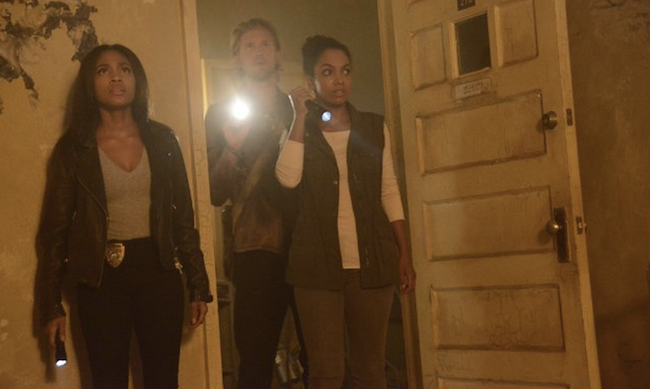 Episode nine of Sleepy Hollow’s second season, “Mama,” opens with a short Abbie (Nicole Beharie) dream. She sees her mother in purgatory, huddled in a cloak. She warns her daughter about demons and then wakes up at headquarters. Ichabod (Tom Mison) has some sort of flu, but he wants to work anyway. He fought in Saratoga with dysentery, after all. Abbie forces him to take some medicine – once he is able to upon the childproof bottle – and take a nap, just as she gets a call from Sheriff Reyes.

In three nights, three residents of Tarrytown Psychiatric have killed themselves, so the ward’s contacted the police. Reyes (Sakina Jaffrey) trusts Abbie now and wants her on the case. Abbie recruits Jenny (Lyndie Greenwood), who knows Tarrytown well, to help her. The two of them bring the data about the three deaths to Captain Irving (Orlando Jones), who doesn’t think any of them appeared to have real motivation. He also claims that neither he nor Henry was involved.

Abbie and Jenny begin to check out surveillance footage of the rooms of the people who committed suicide, first remembering their mother. Jenny recalls watching her dragged away, and Abbie repeats that she just wants to know why she was chosen to be a Witness. They eventually find the footage for one of the men, and after he hangs himself, they can clearly see the ghostly image of their mother in the corner of his room.

In a flashback, young Abbie and Jenny return home after school. Their mother (Lori Mills) is frantic, yelling at them for taking the bus. She fears that demons will take them from her. They repeat the mantra she has taught them: “Eyes open, heads up, trust no one.” Abbie shares this memory with Ichabod, who wonders if their mother ultimately took her own life because demons forced her to.

Nick Hawley (Matt Barr) arrives, requested by Abbie since Ichabod is sick. This aggravates Ichabod greatly, until he tries the matzo ball soup that Hawley brought for him. Ichabod consults one of Benjamin Franklin’s maps, pointing out that the hospital was built right where our world and the spirit world converge. Abbie points out that if Katrina had killed Moloch by now, maybe this wouldn’t be happening. Ichabod is frustrated again, but quickly falls asleep. Hawley drugged the soup to force some much-needed sleep. 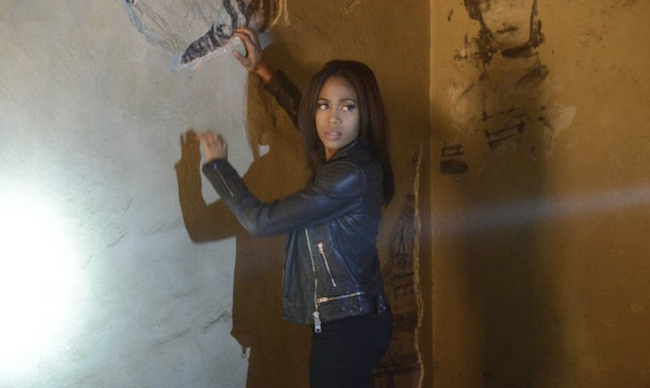 Henry (John Noble) and Katrina (Katia Winter) are shown at Frederick’s Manor with the baby, whom Henry points out is an orphan just like he once was. He asks her to pick up the child, and when she does, he seems to start feeding off the energy in her neck. Henry sarcastically adds that maybe she has the “maternal instinct after all.” Later, Katrina notices the neck damage, and retrieves a lead from the grounds.

Meanwhile, Abbie, Jenny, and Hawley go back to the hospital to investigate further. They see a man in the surveillance footage about to cut himself with glass, so they run to his room. Hawley tackles him, stopping him as the man says, “I need to die.” Abbie sees the ghostly form of her mother in the corner of the room. When Jenny and Hawley turn, Abbie has disappeared.

Abbie walks around in what appears to be an abandoned mental institution, where her mother’s ghost has taken her. The ghost tells Abbie that she is not safe, when Nurse Lambert (Cynthia Stevenson) appears, ending their conversation quickly. Hawley and Jenny split up to find her, and Jenny sees her mother right the number of a surveillance tape on a glass door.

The tape starts out as a routine session with their mother at the hospital. She says that demons came for her and that she only wants to protect her daughter. She blames Nurse Lambert, whom Abbie and Jenny have seen at the ward multiple times. The doctor on the tape says that Nurse Lambert is just an illusion. At the same time – Irving is shown back at the hospital, accepting meds from Nurse Lambert.

Irving is shown sitting in a bathtub that slowly fills, following the orders of a voice and tying himself under the water. Abbie, Jenny and Hawley get there just in time to save him. Later, he admits to Abbie that Nurse Lambert told him to kill himself after giving him what turned out to be psychotropic drugs. Abbie finds an old newspaper article about “the Angel of Mercy,” Nurse Lambert, who convinced patients to kill themselves in the 1950s before she was eventually caught and killed at the electric chair. 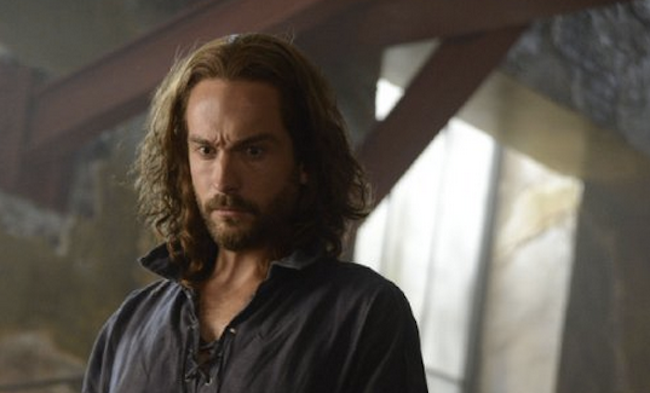 Abbie wonders if their mother’s ghost has appeared to combat this ghost, so they visit their mother’s old cell with Hawley. In the cell, the find elaborate drawings on the walls that have been covered with heavy paint, including the lyrics to “You Are My Sunshine.” The lyrics trigger one of Jenny’s memories, in which her mother almost killed both herself and Jenny with carbon monoxide while in the car. Suddenly, the ghost of their mother appears in the corner, saying, “you’re not safe here.”

The ghost tells them of an ancient hex in her old journal that fights evil spirits. She was trying to remember it to save the man who hung himself as seen in the surveillance footage. Suddenly, Nurse Lambert appears, throwing Jenny, her mother, and Hawley against the wall and taking Abbie with her. The ghost of their mother goes after Abbie, while Jenny and Hawley look for the journal.

Nurse Lambert traps Abbie in a wheelchair and slowly tries to convince her to kill herself, eventually offering a small cup of pills for Abbie to take. Abbie’s mother appears just in time to pull Lambert back. Meanwhile, in the basement, Jenny and Hawley have found the journal, and Jenny is reading the hex. Nurse Lambert slowly starts to dissolve into pieces until she disappears, thanks to the hex. The ghost of their mother disappears as well.

Abbie and Jenny return to their mother’s old cell with Hawley, now joined by Ichabod. Jenny leads a séance so that they may speak with their mother one last time. Their mother always knew that Abbie was a Witness and always fought to keep them alive, in attempts that appeared objectively insane and eventually got her locked away. She reveals that there’s a weapon hidden in the pages of the journal, tells them that they’ve freed her from purgatory, and then leaves.

On the ride home, the four of them find Irving on the street, who has escaped the institution. He climbs into the trunk of the car.

Lastly, at Frederick’s Manor, Katrina makes a magic potion with the seeming intent to send Moloch – the baby – back from whence he came. She hears movement downstairs, and following the noise, finds a young boy. He says, “I’m hungry mother.”