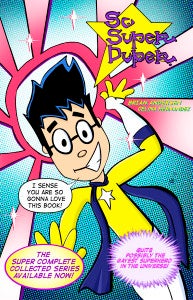 Brian Andersen may not be a household name in comics, but he--and his comic So Super Duper (you can check it out here), which was published over the course of 12 issues as well as being "syndicated" for free online--will probably be familiar to many of our readers. The series is enjoying its first collected edition release coming up soon, complete with a foreword by Zenescope writer and former Newsarama editor Troy Brownfield. Centering around a gay male superhero and the cast of bizarre and lovable characters he surrounds himself with, Andersen says that he tries to instill a bit of himself in the lead character of Psyche, and to make the characters as real as they can be given the necessarily cartoonish nature of the title. He also says that much of the idea of the comic is to write a homosexual protagonist who isn't defined by his sexuality and can reach across cultural lines to appeal to readers who don't necessarily see themselves buying a book about "a gay guy." "Many comic book readers I know are looking for gay content in their comics, moreso content that isn't hung up solely on giant phallic body parts and intercourse (not that I don't enjoy that immensely)," Andersen told ComicBook.com during a recent interview. "So Super Duper is accessible to straight and gay audiences in the way Will & Grace and Happy Endings is accessible to a broad audience." 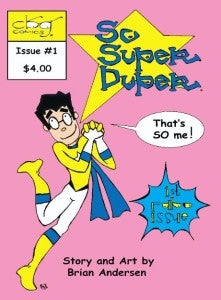 Ironically, while he's often celebrated by both the gay community and comics fans in general who read his work, Andersen also told us that he gets almost as much backlash from other homosexuals for the book as he gets from conservatives who object to the comic on principle. "There does seem to be a backlash in the gay community on femme guys," Andersen explained. "So much attention is put on being 'masculine only' that often I get complaints that my lead character is too 'stereotypically gay.' Which is ironic because he's based off myself! I'm a fruity gay and I love it! And I live it!" Andersen joined us for a conversation about the upcoming trade paperback release. ComicBook.com:You've been doing this a long time. Why NOW for the collected edition? Brian Andersen: I started creating comics six years ago - an ancient and barbaric time before the invention of Facebook, Tumblr and Smart Phones - with the fabulous first issue of "So Super Duper." I always meant the comic to be read as one long narrative - more like an original graphic novel than a collection of 12 individual single issues broken up in a larger story arc. "So Super Duper" should be enjoyed as one fun, heartfelt, superheroic character study that anyone and everyone can read – whether gay (like me) or straight, young or old (like me), human or mutant (like me)! Now is the perfect time to serve the comic community some gay superhero realness, hunties! Can I get an amen up in here? 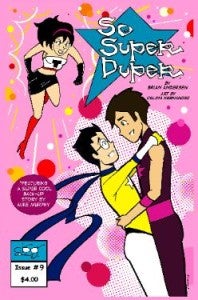 ComicBook.com: And in the course of your long history with SSD, what format was your favorite? You've done print, digital, page-by-page on Newsarama... Andersen: Well heavens, I can't pick a favorite out of all my children. They're all my favorite. But if you're putting a psyche knife – the focused totality of your psychic abilities - to my head and forcing me to choose I'd have to say print is slightly more special to me. Nothing beats holding something you worked so hard on and created out of your own imagination in your dirty little hands. Not even snorting blow off of Channing Tatum's ribbed abs…well, that's probably better. But just barely. ComicBook.com: Obviously you don't have the huge production values that some other books do, but your style has grown and evolved a lot over the years to where the book looks much more slick as it goes on. I know Terry Moore has a bit of a love-hate relationship with his early work, but fans love it. Do you find the same? Andersen: Ha! Production value is SO overrated. Actually, I wish I knew how to polish my work on my own but my lack of production value stems solely from my limited 'artistic' abilities and computer skills, that and my severe mental deficiencies. But mostly my lack of training. And does "hells to the fudging yeah mother fudger" convey enough the love-hate relationship I feel about my own work? Although I've had many (many, many, MANY) people openly tell me how much my art sucks (often to my jowly face) and how much they hate me ( !?!) because I'm such a horrible artist. I mean, they hate ME because of my art? Seriously? Why not hate me because I'm a bitch or because I smell like oatmeal? Sheesh. But regardless, I think no amount of online venom could compete with my own self-criticism. As cliché as it sounds most artists would agree that we are our worst critics. 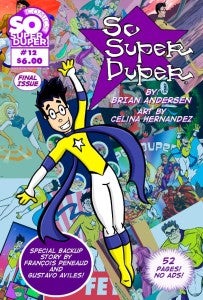 And please keep in mind that at no point do I think of myself as a genuine artist – at least not with a straight face (or even with a gay face). I like to think of myself as more of a 'doodler.' And I find my doodles to be rather cute. With this collection I've been able to re-read and absorb my entire comic as one complete work and I find my art to be quite fun. Is it crude? Hells yeah. Rough around the edge? Well, duh. But the simplicity of my drawing doesn't make it any less fun or cute. (Feel free to slap me across the face if you think I'm wrong.) ComicBook.com: Obviously, it seems as though you cultivate a different fan base than most superhero comics. DO you find you draw more from the indie side? Andersen: I draw more from my super-limited-drawing-skills side rather than any sense of indie-ness. But believe me, if I could I'd sell my left nipple, my beloved cats and my boyfriend's soul to Mephisto to be able to draw like Nicola Scott, Stuart Immonen or (Kirby help me) Rob Liefeld…well, maybe not Liefeld. (Sorry to drag another maligned creator under the art bus, Mr. Liefeld). But in all seriousness I did the best I could with what limited abilities I had and if I have the honor of calling my doodle efforts an "indie art style" than I'm super honored to be called indie. ComicBook.com: Books like yours always feel like they could be instrumental in drawing in readers from sources other than the traditional comic shop channels. Have you found that to be true?' Andersen: Fer shure! I'm always surprised when I find someone who maybe isn't a "Big Two" reader, or a superhero reader, or even much of a comic book reader saying they enjoy my comic. And yes, there are some people who actually enjoy my comics, and these "some peoples" aren't all my mother. I always fall back on the assumption that a good story is a good story, regardless of the format it's in or if the main character is a fey gay superhero. Hopefully my little So Super Duper qualifies as a good story. (Feel free slap me across the face if you think it isn't.)