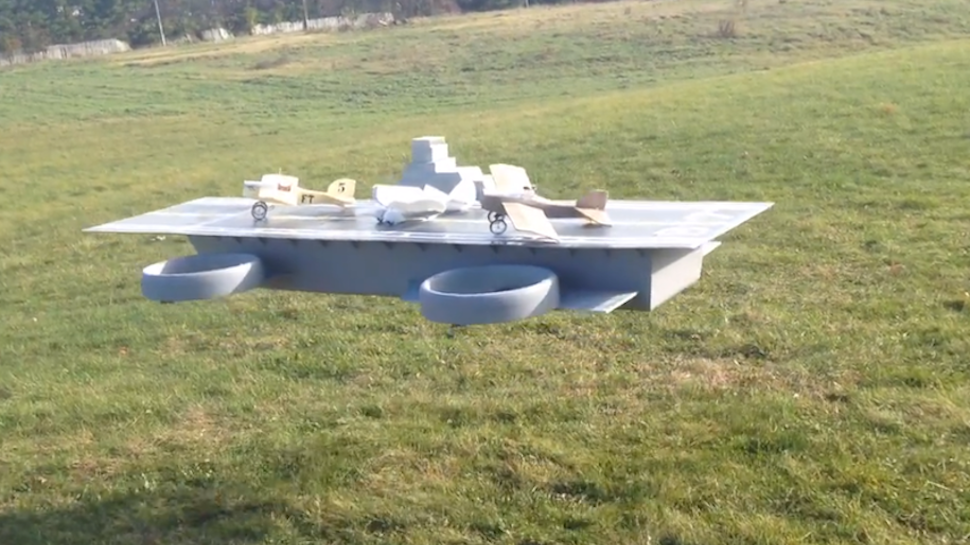 It's the case of science fiction becoming science fact, even on the small scale.

In a recent podcast of Flite Test, the design for a helicarrier was discussed and explored, the Nerdist reports.

Comprised of $1,000 worth of parts with a quadcopter as the helicarrier's base. Of the $130 motors they used to lift the carrier off the ground, the aircraft could lift only 15 pounds. Nevertheless, a little model airplane successfully took off from the carrier's deck in flight!

While the helicarrier has been a staple in sci-fi films such as The Avengers and Sky Captain and the World of Tomorrow, previous real life attempts have been less than fruitful.

The US Navy built two rigid airships in the 1930s, the USS Akron and the USS Macon. Both of these helium-filled airships were designed for long-range support to reconnaissance aircraft, and both went through an experimental phase as floating aircraft carriers.

However airships as aircraft carriers were eventually abandoned because the vehicle got too heavy to lift itself. But with the advancement of technology and the success of a smaller crude model, perhaps a helicarrier could be within the immediate future.

Somebody Made A Working Avengers' Helicarrier That Launches Other RC Planes