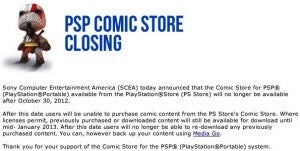 Sony will shut down operations on their PSP digital comics storefront effective October 30, with fans no longer able to access their purchased content by the end of January 2013. According to an announcement from Sony (seen at right), October 30 will be the last day that fans can buy new digital comics on the device, while they'll have a couple of months after that to download their purchased content. After that, readers will not have access to their content. It also suggests that, depending on licensing deals, some content may not be available for download after October 30. With no further details being offered, it may be in the best interest of fans who own that content to download it sooner than later. The service began in 2009, but stopped updating in 2011, with the vague message that digital comics would come to other Sony devices. The digital comics marketplace has been growing, but most of that growth has seemed to be directed to ComiXology, with other competitors reducing their services or market presence. GraphicLy recently discontinued its support for its mobile app and has shifted its focused from monthly, serialized comics to collected editions and other illustrated books. Fans have long speculated that if ComiXology or another major digital comics marketplace were to go out of business, their content might disappear altogether, since most digital comics are cloud-based rather than downloaded directly. That seems to be the case with Sony, as there is no indication that the PS Vita or other devices will pick up the shop once it's closed on PSP.