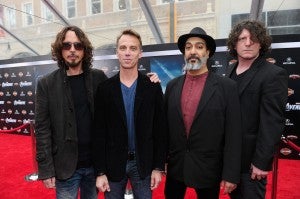 Indie rock giants Soundgarden recorded their first new track in fifteen years as part of the soundtrack to Disney's upcoming adaptation of Marvel's The Avengers, due in theaters on May 4. The anticipated song was teased by Rolling Stone before finally being released but is now free as part of a cross-promotion between iTunes and The Avengers. The soundtrack itself is $9.99 at iTunes, but fans who pre-order the album will find themselves on a customized page in the iTunes store where they'll be able to watch the Black Widow clip, plus an "exclusive" clip which showed up on the Internet this morning featuring Thor and Iron Man, and download "Live to Rise," a song Soundgarden was approached to write in March while in the studio recording their comeback album. There's no purchase necessary to get the free track, though--this reporter downloaded the freebie before ordering my copy of the full album, just to be sure, and it worked perfectly. It's the first time Soundgarden has written a track exclusively for a movie, but singer-songwriter Chris Cornell, the band's frontman, has done so many times in the past. "The hard part of writing a song for a film is it has to act as a Soundgarden song, first and foremost, then obviously, it has to coexist with the film," Soundgarden Cornell said earlier this week in an interview with Billboard.