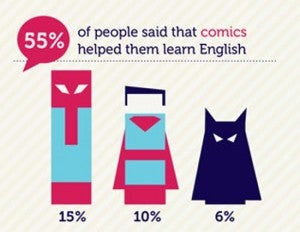 As many readers of Comicbook.com likely grew up reading comic books, it should come as no surprise that comic books can be a valuable tool when it comes to teaching people how to read. A new study by Kaplan International Colleges, a leading provider of English courses, indicate that comic books can also be an integral part of helping people from other countries learn the English language. In the Kaplan survey, over half of the respondents said they improved their knowledge of the English language by reading comic books and that Peter Parker's alter ego was the most popular superhero. To take the top honor, Spider-Man beat out Superman and Batman, who finished in second and third place respectively. Kaplan's global 'How to Learn English' study showed that 55% of respondents picked up some English language skills from reading comic books. 15% of respondents credited Spider-Man with helping them learn English with 10% crediting the Man of Steel and 6% crediting the Dark Knight. Junko Kobayashi, who is President of The Stan Lee Foundation, said: "The Stan Lee Foundation also believes that superheroes have a role in education by promoting learning. We are pleased that Spidey, such a well-known character, has played a major part in helping students study English." Kaplan asked hundreds of their past and present language school students whether watching television shows, listening to music, reading comics or playing video games helped them to understand and study English. The results have been turned into Kaplan's How to Learn English Infographic, which was created by graphic designer Sergio Fernandez Gallardo.

How to learn English via Kaplan Blog
Start the Conversation