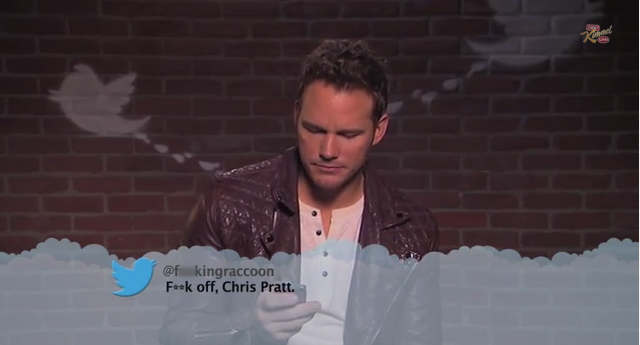 Star Lord’s Chris Pratt, Pepper Potts’ Gwyneth Paltrow, and Hit-Girl’s Chloe Grace Mortez were the targets of some mean spirited Tweets this past week, but comedian Jimmy Kimmel had just the thing to cheer the actors up.

In Jimmy Kimmel Live’s “Mean Tweets” feature, each actor read aloud the venomous messages directed at them. Each actor took the Tweets in stride, laughing at what the haters had said to them while providing comebacks of their own. This is the eighth installment in the Mean Tweets feature,

Other featured celebrities included 300’s Gerard Butler, John Stamos, Adam Sandler, and Britney Spears. You can check out the video below.

No spoilers here, but Chloe Grace Mortez definitely wins for the best comeback. Chris Pratt’s isn't too far behind, but how did he not catch that his hater's name was "****ing Raccoon?"