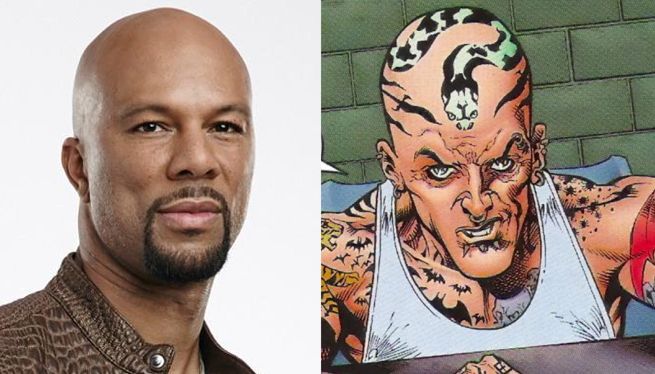 When he was cast in Suicide Squad, music star Common's role was never identified. He also never appeared in a photo of the "complete" cast for the film, meaning that to this point, he has remained unnamed.

Well, paparazzi photos making the rounds on social media appear to show the star in wardrobe as Abel Tarrant, The Tattooed Man.

Tarrant, a post-Infinite Crisis reinvention of a classic DC villain, who uses an ink with special properties to tattoo himself and is then able to bring the tattoos to "life" to work as offensive and defensive weapons and allies.

In the set photos which can be seen on JustJared, Common appears to be tattooed -- not an uncommon trait for actors in this movie -- but more particularly tattooed with a serpent on his head, which is one of the most recognizable of the Tattooed Man's tattoos. He also has facial piercings that match Tarrant's from the comics.

There is another Tattooed Man with a similar backstory and appearance who is kind of an antihero who appeared in Green Lantern comics.