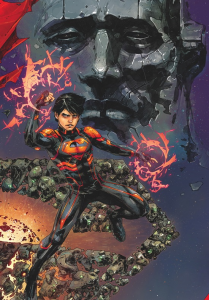 The upcoming 25th issue of Superboy will feature a key plot beat in the battle against the Kryptonian villain H'El, Scott Lobdell told the crowd at today's Superman panel at New York Comic Con. That beat? The death of Superboy, as the character we've been following all along will fall and be replaced by John Wayne Kent, the clone introduced in Superboy #19 and brought to life as the result of a mixture of Superman and Lois Lane's genetic materials. It's just their luck, really. Don't those things always happen just when a marriage ends? In all seriousness, this might be seen as a little bit of a reboot of the (New 52) reboot, since aside from the Lois Lane connection, the "new" Superboy we'll be seeing going forward from #26 seems to have more in common with the pre-New 52 Superboy than the existing character does. Lobdell claims that the Superboy and Teen Titans star will make "the ultimate sacrifice, giving his life in order to stop the universe from falling apart," setting the stage for the series to take on its new lead. He also noted that Supergirl may soon be leaving the Superman family of titles to spend some time in another corner of the DC Universe--which, if history serves as a guide, would likely be with the Legion of Super-Heroes...but since that's not his title, and Lobdell is known to be a joker, may not really bear on reality. As they note in that link, though, it at least seems like the Superboy part rings true, based on a solicitation for Superman #25 that suggests "A hero will fall during this epic adventure."