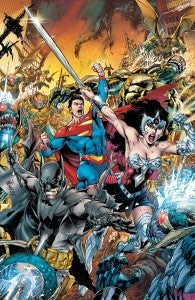 Without offering any commentary on the image, DC Comics just released a first look at the much-anticipated Justice Society series Earth 2 by James Robinson and Nicola Scott in the form of a variant cover to its first issue. The cover, drawn by DC's star art team of Ivan Reis and Joe Prado, features Earth 2's Superman, Batman and Wonder Woman battling against Darkseid's Parademons in a scene reminiscent of what's going on in Geoff Johns and Jim Lee's Justice League right now. Only those characters are shown, giving readers no clue as to what other Justice Society members may have survived the New 52 relaunch to star in this title. Whether this cover even reflects the contents of the book or just suggests an Earth 2 spin on the best-selling first arc of Justice League is unclear; the latter, though, seems more up Marvel's alley than DC's (think Deadpool and Venom variants, etc.) and it's probably safe to assume that these versions of DC's "big three" heroes will star in Robinson's title. James Robinson, of course, wrapped a run on Justice League of America just before the New 52 relaunch that saw him writing a version of the big three not entirely familiar as well. With Dick Grayson as Batman in the DC Universe at that time, Robinson appropriated Donna Troy and Mon-El/Valor (then later Supergirl) to represent the most important franchises in the DCU. Superman and Batman were "honorary" members of the Justice Society in the earliest days of the title, not stars of the book, as a result of an editorial policy that kept characters who had their own monthly titles off the team; Wonder Woman served as the team secretary but rarely saw action. Earth 2 launches in May as part of the "Second Wave" of DC's New 52 relaunch titles and will tie into the current Huntress miniseries as well as the upcoming Worlds' Finest.