No, we’re not kidding. In the issue, Lois Lane is seriously injured, and the doctors are afraid that they won’t have time to save her. Superman speeds off to the library and reads every medical text ever published, so that he can operate on Lois. When the doctors offer to show Superman the x-rays, Superman says he can just use his natural x-ray vision.

When the doctors offer Superman a scalpel, he says, “I won’t need one of those either, thanks. My thumbnail is harder than diamond.” Then, in what has to be one of the most unsanitary operations ever performed, Superman proceeds to slice Lois Lane open with his thumbnail. The even funnier thing is that the doctors help Superman put on purple surgical gloves before the operation, but he has to put a hole in them in order to use his thumbnail to cut open Lois.

In addition to the hygiene issues, there might be another major problem with Superman performing the operation. Superman doesn’t have a medical license, and it’s of course illegal to practice medicine without a license. Of course, Superman might could make a case that he was operating under the Good Samaritan act and helping to save a live. However, that would likely be a stretch, as Superman wasn’t just applying emergency first aid, but he was conducting a bona fide operation while trained surgeons stood around and watched. 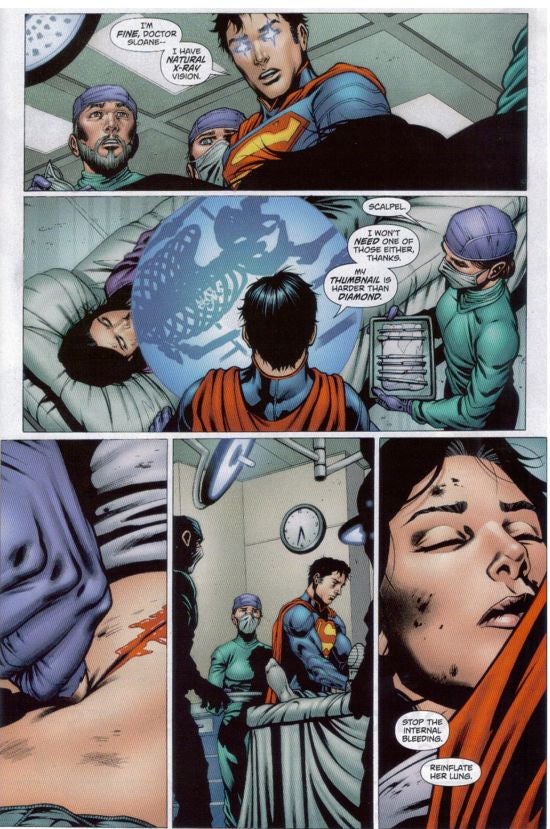