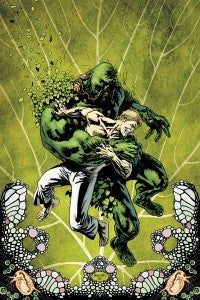 DC Comics announced yesterday via their blog The Source that Swamp Thing #2 became the first of October's DC releases to go back to presses for a second printing. This comes on the heels of the spectacular sales success the company enjoyed in September, when all 52 of the #1 issues released as part of their "New 52" initiative went back for second printings, and many (including Action Comics, Animal Man and Batgirl) even had third printings.

Written by Scott Snyder and with art by Yanick Paquette, Swamp Thing has been one of the best-reviewed comics of the New 52 and indeed of all 2011 and, along with Snyder's bestselling relaunch of Batman, has established the young writer as one of DC's top talents. Which titles will be reprinted next? It's hard to say--many retailers ordered better for the second issues than they did for the #1s and don't need as many refills--but it's hard to imagine that some lower-ordered and critically-acclaimed titles like O.M.A.C. or Animal Man may not follow suit.

SWAMP THING #2 Goes Back To Press For a Second Printing