One of our favorite events each year is Top Cow's Pilot Season.  Various teams put together a 'pilot' issue of a series, and then fans vote on a winner.  And this year, the winner is 'The Beauty.' 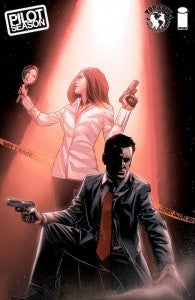 Created by Jeremy Haun and Jason Hurley, 'The Beauty' takes place in a world with a new type of STD: one that you want to catch.  This particular STD makes infected people incredibly attractive. The story centers on two detective that finds that there's no such thing as a free lunch—even with good STDs.  The pair uncover the undesirable side effects of the disease. What happens next? Well, that's the great thing about Pilot Season.  As a prize for winning the competition, 'The Beauty' gets an entire series.  "Now that we've won we're going to be able to finish the story. I'm really excited to do that. It's exciting to be co-writing and drawing something like this," said Haun. "The process is surprisingly fast and a hell of a lot of fun. The trick of it is going to be balancing work on The Beauty with my regular art duties on The Darkness monthly book. Luckily, they're both books that I absolutely love. It also doesn't hurt that I just love to work. As crazy as it may seem, drawing two books is kind of my idea of fun." This Pilot Season featured a different format, with elimination-style voting as titles competed over three rounds.  Record early round voting crashed Top Cow's site.  At the deadline, nearly one million votes had been cast—an impressive total. Other Pilot Season 2011 contenders included THEORY OF EVERYTHING by Dan Casey, Nick Nantell and Thomas Nachlik, ANONYMOUS by Matt Hawkins, Alan McElroy and Michael Montenat, MISDIRECTION by Filip Sablik and Chris DiBari, THE TEST by Joshua Hale Fialkov and Rahsan Ekedal, SERAPH by Lance Briggs, Phil Hester and Jose Luis, FLESHDIGGER by Shannon Eric Denton, Brad Keene and Alex Sanchez and CITY OF REFUGE by Morgan Davis Foehl and Dennis Calero.