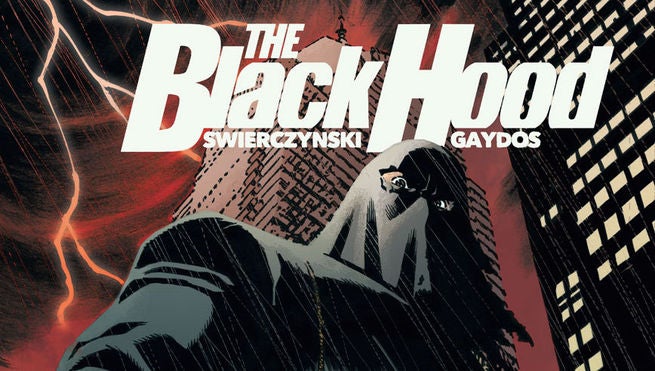 In my review of The Black Hood #1, I spent a lot of time discussing the look and feel of the comic. Duane Swierczynski, Michael Gaydos, and Kelly Fitzpatrick crafted a story that was pure noir. It was a comic coated in darkness with a fire burning just beneath the surface. The Black Hood #2 clarifies its place within the genre. The Black Hood isn't just a noir tale, it's bleak and ugly in a way that few of its peers are. There is no place for a man of the people or reluctant hero here; no Sam Spade's or Phillip Marlowe's to be found. This is more like the work of James Ellroy where the closest thing to a hero is the man with the least stains on his soul.

Looking at Gaydos and Fitzpatrick's artwork on each page of the issue, it's easy to imagine them crafting the storyboards inside Ellroy's head for a novel like The Big Nowhere or White Jazz. Gaydos composes his pages to be confrontational. There's no looking away from the violence of the pain he is presenting. Action sequences land each panel with a sickening thud focusing on the force of human bone on meat. Less obvious moments can hit every bit as hard. The drugs and extortion witnessed as Greg falls even further is just as sickening. Gaydos' holds onto your head and forces you to watch it all as it happens, never providing a release from the tension he builds on each page.

Fitzpatrick is comfortable coloring the world of Philadelphia. Unlike Ellroy's novels, there are no giant neon signs or glitzy strips to light up this twisted nightmare version of an American city. What Greg called "Killadelphia" in The Black Hood #1 is drenched in the smog and ash of an industrialized hellscape. Looking at exteriors in The Black Hood #2, you can imagine wiping your fingers across the page and pulling them back to find them covered in soot. Smoke hangs across these panels firmly planting readers in the terrible world Greg cannot escape by turning the page.

That mood is not as consistent in the narration of Greg Hettinger written by Swierczynski. The Black Hood #2 picks up directly from the end of #1 with Greg facing down a mugger as the new Black Hood. Almost every panel of the confrontation is accompanied by a narrative caption. Some lines, like "I had the element of WTF on my side", go from the stylized nature of noir cop-speak into pure goofiness. Writing like this is so hardboiled that it has become a rock, impossible to chew on.

This raises the question of how necessary the narration throughout The Black Hood #2 is. Many sequences, specifically the action beats, function perfectly with only the dialogue on the page. Captions slow the pacing of the story and point to themes and ideas that are already present for observant readers. Swierczynski's plotting and character beats fit the tone of the story perfectly, but his scripting is overly verbose. Rather than trust the visual medium he is interacting with, he writes to underscore each moment. It is the curse of a novelist transitioning to comics, unable to truly trust a story that functions without the constant involvement of words.

Swierczynski, Gaydos and Fitzpatrick are some of the most potent purveyors of modern comics noir since Brian Azzarello and Eduardo Risso debuted 100 Bullets. The look and feel of The Black Hood are entirely different, but the underlying sense of dread and soiled world building are just as good. The Black Hood #2 continues down a dark road, one that doesn't allow any beam of light to intrude, making it a must read for fans of crime comics everywhere.

The Black Hood #2: James Ellroy Painted on the Comics Page