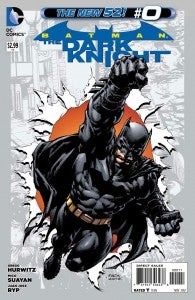 Following the relaunch of the DC Universe with The New 52 last year, fans discovered that many of the events that have happened in Gotham City over the years may have happened due to the influence of the Court of Owls, a criminal organization with a long and secret history in the city.

Well, now it appears as though there might be at least one more long-simmering conspiracy at work: the murders of Thomas and Martha Wayne.

Batman takes on the most important case of his career as a detective – who murdered his parents? Meet Joe Chill and explore the epic conspiracy to wipe out the Wayne family!" Says solicitation text at Comic Book Resources, accompanying the exclusive preview pages for Batman: The Dark Knight #0, out tomorrow from DC Comics.

That's right, folks, it appears as though Batman's parents died as the result of an "epic conspiracy." The myth of a gunman who stumbled upon them randomly, or who in the Christopher Nolan films was in the right place at the wrong time after Bruce demanded to leave the theater, is apparently gone to make way for a new origin in the New 52.

Batman's history is one of the most complicated and confusing in the new DC Universe, in no small part because (like Green Lantern) the publisher tried to retain so much of it. The guiding editorial philosophy appeared to be "if it ain't broke, don't fix it," but in order to make the stories sync with the rest of the DC Universe there have been tweaks made along the way, leading to a number of minor continuity discrepancies that drive fans crazy.

Something tells us this one will be the most controversial.