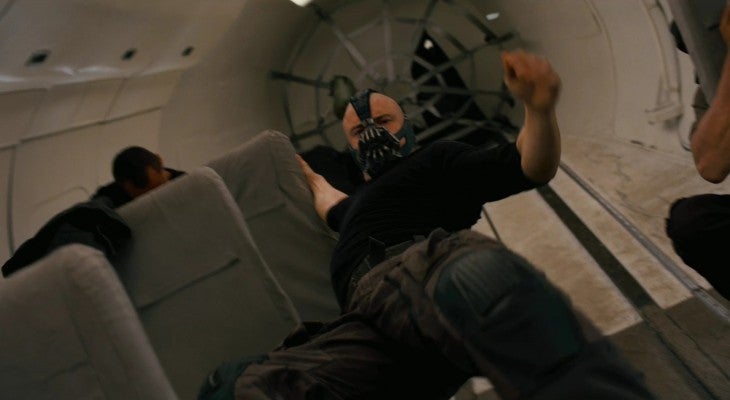 Chris Nolan's filmography is packed with memorable scenes and iconic moments. But, perhaps like why someone would shoot a man before throwing him out of a plane, you've wondered which one is Nolan's favorite.

Well ponder no longer, filmophiles. While speaking at the 2015 Tribeca Film Festival, Nolan revealed that the airplane heist from The Dark Knight Rises is the best of his filmed sequences. The opening scene to The Dark Knight Rises, which took place high in the skies of Scotland, required a surprisingly small amount of special effects.

Here's what he had to say about Bane's introductory scene.

"It took us about two days in Scotland," he explained about the sequence, which you can watch below. "And it was an incredible sort of coming together of months and months of planning by a lot of different members of the team who worked for months rehearsing these parachute jumps and wind walking, all these different things… The visual effects work in the sequence is very minimal… I was really amazed by what the team we had put together had achieved using very sort of old-fashioned methods, in a way. I was very proud of the way that came together."

What's your favorite Chris Nolan scene? Is it from The Dark Knight trilogy? Sound off in the comments below.

Supernatural Prequel The Winchesters Gets a Premiere Date