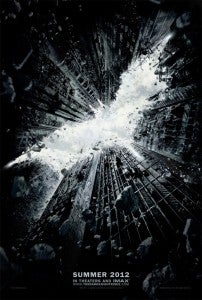 In addition to the trailer, various conspiracy theories have arisen around the officially released movie poster. We posted about the possibility of a Superman logo hidden in The Dark Knight Rises poster. Others have posted about seeing (or not seeing) everything from the Joker's face to Catwoman to a flying unicorn. Whether there are really any hidden images at all in The Dark Knight Rises poster is still a subject of heated debate. While most movies would never encounter such fanfare, conspiracy theories, and scrutiny, analyzing every little detail of a Batman movie is part of the fun. Considering The Dark Knight Rises is still close to a year away from release, expect things to only get wilder from here. Word is that the trailer will be officially released online on Monday, and who knows what other treats Warner Bros. might have planned for Comic-Con week.