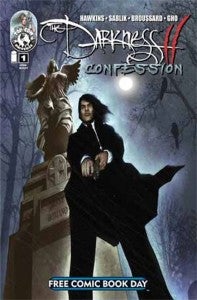 came out from 2K Games this week, shunting Top Cow's Jackie Estacado into the multimedia limelight in a way that non-Big Two characters don't usually get. What did Top Cow do to take advantage of all that attention? They put together a tie-in comic, available in comic shops free on Free Comic Book Day and digitally available to those who bought the game. The comic, probably predictably, bridges the gap between the first and second Darkness video games and was put together by a group of Top Cow creators and the studio's executives, Matt Hawkins and Philip Sablik. What's notable, though, is that The Darkness II: Confession wasn't put together either by the outgoing creative team or the much-touted incoming writer David Hine, who will take over the book in March (and tying into the surprise ending of last month's Artifacts #13) after several years of fan-favorite creator Phil Hester. So, what does Hine think of the comic? And how does it gel with what he's planning to do starting next month? ""That's actually a very good comic to get caught up on the darkness becuase it's a little different from the comic book version but it pretty much gives the background to where Jackie and the Darkness came from," Hine told ComicBook.com in a recent interview. The writer also said that he thinks digital is the future of the comics industry, and that digital throw-ins with a product like the video game is a great promotion. "I think if people who buy the game are picking up on that, then that should lead to them hopefully regularly buying the comic."