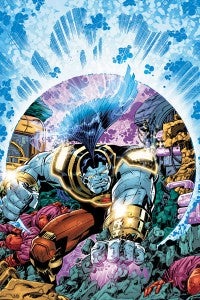 It was only a matter of time before the first cull of the scythe went through the field over at DC Comics, and the first books to be cancelled as part of the DC relaunch has been announced. All of the following series will end with their eighth issues this spring.  Making the unfortunate list are some books that had been well-received critically, some with a growing fan base, and some involving old and familiar characters.  Ultimately though, sales mean a lot, and many of these books found themselves close to the bottom of the ladder in sales out of the new wave of books in light of DC's much publicized relaunch.  Here's the body count: First up, OMAC.  I can't say that I'm shocked, and I even predicted that this would be one of the first books DC would cancel in the new year when I recapped the new 52 a few months ago.  It started out at the bottom of the stack in sales of the new 52 and hasn't gotten much commercial traction since, despite some glowing reviews from various comic related websites.  Next on the list is Static Shock, a book that was an interesting choice and was not too bad in its first few issues.  Certainly a book that kids and adults could enjoy, this one takes a little bit of diversity out of the new 52, as does the surprising cancellation of a book like Mister Terrific, which was actually selling better than a decent number of other books in the new 52.  I think Mister Terrific was a solid book, and he's an interesting protagonist.  It's a shame that he is gone.  Hawk & Dove are also bowing out later this year, and that is a shame.  The book has been plagued by some editorial directions, causing a shift in creative teams, but the book had potential when it, pardon the pun, flew out of the gate back in September. Also on the chopping block, Men of War and Blackhawks.  Both of these books are strong niche books, Men of War more so than Blackhawks, but battle/war comics can be a hard sell in an era and time where many people are very vocal about military operations on both sides.  Some of these characters will likely pop up in other DC books at some point in the future, but it's a sad announcement for fans of these books and characters.

The First to Fall: DC Cancels SIX Titles of New 52