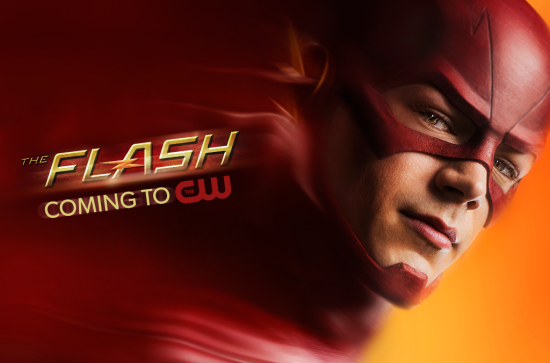 With the release yesterday of the five-minute extended trailer for The CW's Arrow spinoff The Flash, everyone is buzzing about the series like they can't control their weird, vibrate-y speed powers. We decided to take a look at the trailer in some depth and to spot some of the stuff that you might not notice if you weren't a comic book reader, or were just too absorbed in the action to look for details. We did, however, skip over things like "Oh, there's Iris," since her casting notice more or less covered that and she is, after all, the female lead in the show. "Guess I wasn't fast enough." Young Barry reiterates something that Barry will struggle with all the way up until the moment he's hit by lightning; he's chronically slow, disorganized and running behind. This is an example of the "bumbling Clark Kent" archetype that was popular in the Silver Age, with superheroes often masking their true selves by making the man behind the mask seem incompetent or otherwise an incredibly unlikely candidate in order to throw people off the scent. Barry being slow, though, is a plot device that writers have kept even as that particular fad ended. Clark Kent isn't bumbling anymore, but Barry remains a bit behind the curve. We get a little of the clumsiness even with adult Barry in the ad. The attack on Barry's mom Barry Allen's parents were never a key part of his mythology until 2009, when Geoff Johns and Ethan Van Sciver made Flash: Rebirth, a story that reinvented Barry for a modern audience after his return from the "dead" in Final Crisis. In that miniseries, Nora and Henry Allen were retconned to give Barry a tragic past and a familial motivation to become a CSI and, later, a superhero. 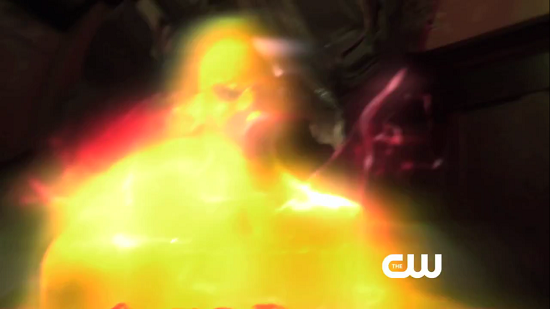 Reverse-Flash The killer in that scenario? The Reverse Flash, who traveled back in time to do it. When Barry discovered this and traveled back to stop him, the end result was the Flashpoint event miniseries, a dark, alternate timeline which ended with a line-wide reboot of the company's publishing properties. Detective West's admonition "You can't keep ducking work so you can go off chasing these urban legends, Barry," he's warned by Detective West in the ad. Not surprising, since in the episodes of Arrow in which Barry appeared, the young CSI was in hot water with his supervisor for faking sick to go to Starling City and chase down reports of Mirakuru-fueled supermen. We also get a look at his origin story -- which is something we saw happen on Arrow, probably in case the pilot never went to air so they could still use Barry in future episodes of the parent series. 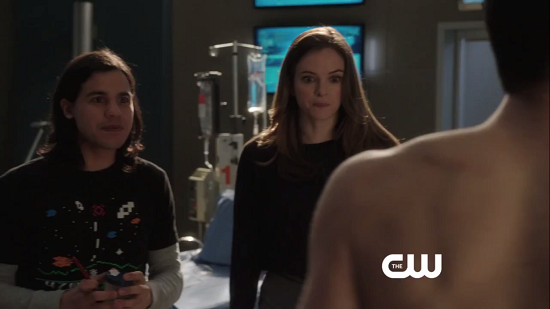 Vibe & Killer Frost In the comics, one is a superhero and the other a supervillain, but here, Cisco Ramon and Caitlin Snow seem to be Team Flash, his supporting players a la Diggle and Felicity Smoak in Arrow. Ironically, both Caitlin Snow and Felicity Smoak were characters most closely affiliated with Firestorm before coming to TV as supporting characters for other heroes. Snow, if the show follows the comics, will eventually become the unstable, ice-powered supervillain Killer Frost, while Ramon will become the Justice Leaguer Vibe. ...And I can't tell: does Barry say "New metahumans" or "YOU metahumans" when talking to them later in the trailer? Because that's a huge distinction, especially for these two. Metahumans Also, "metahumans." DC Comics's preferred term to avoid superhero/superhuman, which can water down the Superman brand and becuase many other terms, such as mutants, are taken. Time standing still It's a long-standing thing in The Flash comics that time stands still for speedsters to varying degrees. Jim's Big Ego, fronted by Jim Valentino (son of Barry Allen co-creator Carmine), acutally made a song about how lonely that can be.

Sure, Harrison Wells (the guy in the wheelchair, played by Tom Cavanaugh) doesn't actually appear in the comics (though he's obviously based on S.T.A.R. Labs's Garrison Slate), but his theoretical science is a big part of the post-Crisis on Infinite Earths versions of The Flash. the Speed Force drove Wally West and later other speedsters, including Barry Allen, to try new things and experiment with both practical and theoretical science to make his powers do crazy stuff like travel through time, removing the concept that The Flash is "just a guy who runs really fast." 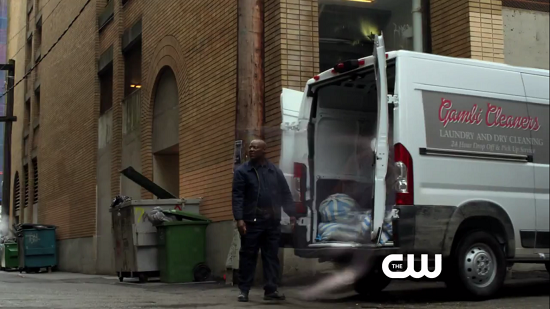 Crime TailorThanks to The Flash Executive Producer Andrew Kreisberg for pointing this out. The laundry truck that Barry Allen runs into at one point in the trailer is labeled "Gambi Cleaners" (see above). There are actually two tailors named Gambi in the DC Universe -- one of whom lived in Metropolis and was a supporting character for Black Lightning -- and another from Central City who designed costumes for, among other villains, Flash's Rogues. Ferris Air Not only does Ferris Air -- the company that employs Green Lantern and his on-again, off-again girlfriend Star Sapphire -- make a brief appearance in the trailer, but it's the test field. In other words, where a test pilot like Hal Jordan or his father Martin might do their job. The guest stars are so close you can almost taste it in a scene like this. 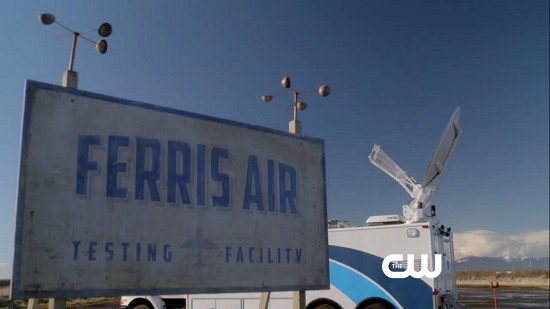 Worth mentioning, since it's prominently displayed, that the high tech facility where Barry wakes up from his coma is S.T.A.R. Labs, a DC Comics research organization who often help superheroes including Superman learn to use and control their powers. That is, of course, not their primary purpose but when it comes down to it, superheroes can be pretty time-consuming so it's often all we see them doing. Callback The first test run all feels vaguely reminiscent of the analogous scene in John Wesley Shipp's 1990-91 The Flash from CBS. 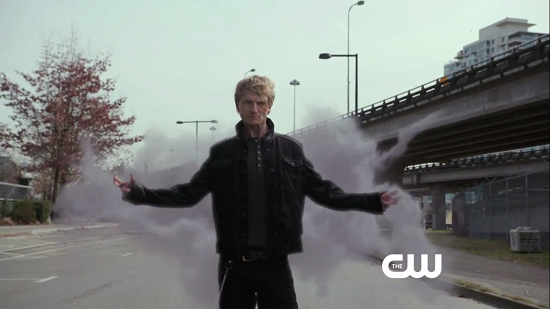 The pilot episode's villain is apparently the Weather Wizard, one of The Flash's main rogues. It's perhaps worth noting that Barry Allen was featured in a (terrible) TV pilot for a Justice League of America series that never aired back in the '90s, and featured the League (or a version of it, with Guy Gardner, Fire, Ice, Martian Manhunter and The Atom joining Barry) squaring off against a Weather Wizard knockoff called The Weatherman. 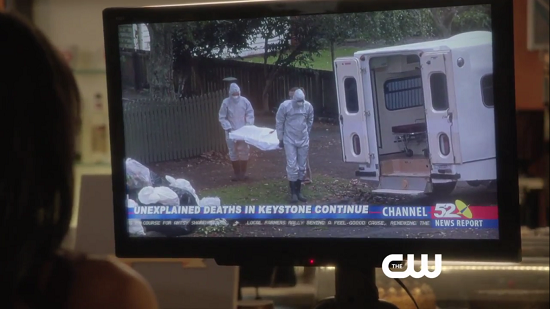 Keystone City At one point in the trailer, Barry and company are watching a news report about mysterious deaths that he believes are related to metahumans -- in Keystone City. Keystone and Central City are "twin" cities, with Keystone serving as the home city for Golden Age Flash Jay Garrick and Post-Crisis Flash Wally West, while Barry Allen lived in Central City. For years, the existence of Keystone was "hidden" until an event made Barry Allen aware that Jay Garrick, whose comic book adventures he read as a child and who inspired him to take the name The Flash, was real and simply living on a parallel earth. It seems unlikely Garrick will play a role in the series, or at least that specific role. There was no mention of The Flash comics anywhere in Arrow or in this trailer and it seems as though Oliver Queen will be the one to inspire Barry to use the name The Flash. 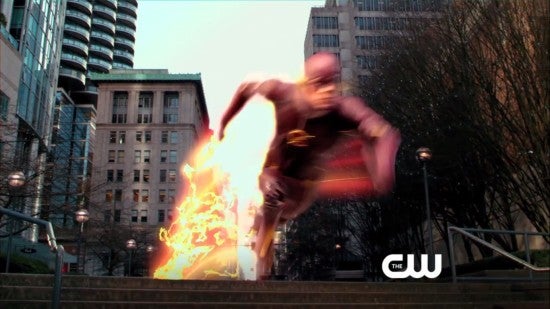 The Flash #118 Maybe it's just because I really liked the Mark Waid run on The Flash, but I caught a glimpse of Barry in the trailer that really reminded me of this one specific image... 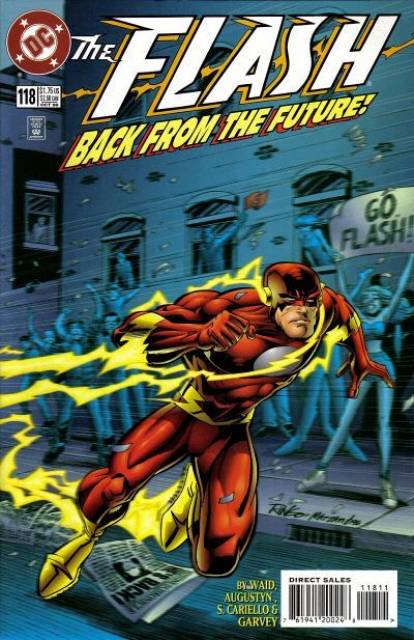 As we've seen in Arrow, Central City also gets all their news from "Channel 52," which is the two-page backup feature that appears in all of DC Comics's publications to catch fans up on the bullet points of the wider universe outside of the book they're reading. 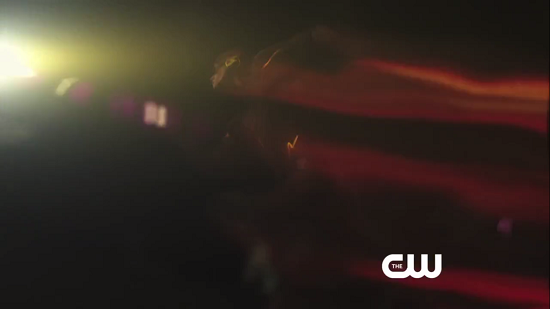 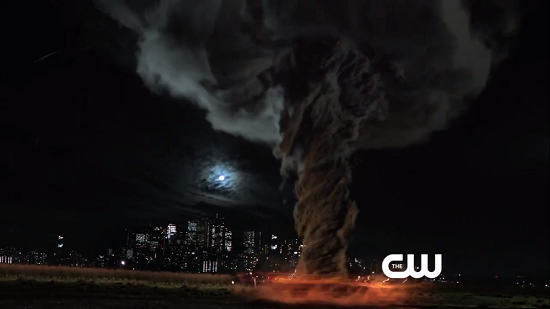 Running against the wind Yeah, that's The Flash running counter to the winds of one of the Weather Wizard's cyclones to make it peter out. You're welcome. 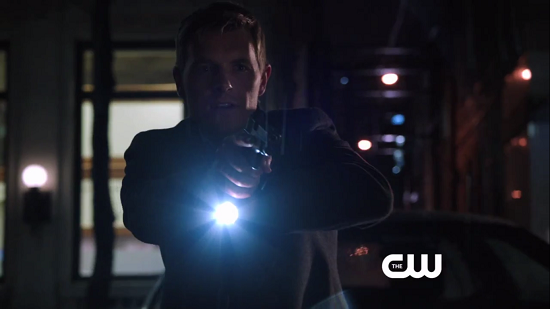 Eddie Thawne Here's your prime suspect to be the Reverse-Flash, guys...but if so, he either hasn't got there yet, or he's playing dumb, because he seems to be telling Barry that he's not fast enough to outrun a bullet. This is Central City PD officer Eddie Thawne (Eobard Thawne is the Reverse-Flash), and nobody knows much about his past. Suspect... "My name is..." More than any other superhero, The Flash (whether it's Barry Allen or Wally West) tends to open up his adventures with this declaration. It will make a lot more sense coming at the start of episodes of The Flash than it does on Arrow. 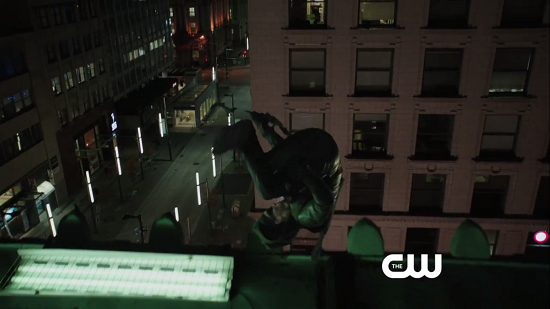 Arrow So, Barry may have given Oliver Queen a mask, but it seems Oliver gave Barry a name. Pretty fair trade, I guess.

The Flash Trailer: Easter Eggs and DC Comics References From an In-Depth Look