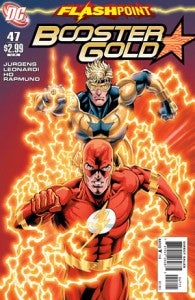 The final issue of Booster Gold hit the stands this week, bringing to a close the adventures of Booster Gold, Time Master in the present-day DCU. Whether this issue turns out to be the first appearance of the new DCU or the swan song of the old, one thing appears clear--both Booster Gold and Alexandra Gianapolous found a way home from the Flashpoint Universe, even if only Alexandra remembers what came before. The real question is whether she--or Booster's fellow Time Masters Rip Hunter and Michelle Carter--will still exist after August 31. Written by Dan Jurgens, this week's issue features guest art by Rick Leonardi and Don Ho and a few pages of epilogue by Jurgens and Rapmund. Sometime soon, Dan Jurgens and series finishing artist Norm Rapmund will join me on Panel Discussions to talk about the series and take calls from listeners. Watch for more information on the main page! Until then, though, see what he has to say about this week's series wrap-up. The Gold Exchange: Last thing's first, as you got to draw it--is it just me or does Booster instantaneously segue between the old and new DC Universes? His mindset seems to shift very fast after he gets to Vanishing Point. Are we seeing the birth of the new Booster, not remembering being a Time Master, or was he only confused to be there because he departed from Rip's and that's where he planned to end up? 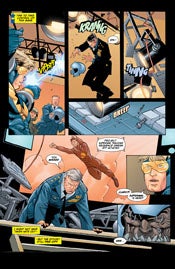 Dan Jurgens: I think it's fairly clear Booster remembers being a Time Master because he recognizes Vanishing Point. He wasn't confused by where he was... only how he got there. His reason for going there and methodology used are what puzzle him. GX: I know you've told me before that you like Leonardi's work a lot--how did he turn out to be the guy helping you wrap the series on art? DJ: We were up against the gun in terms of time and were looking at available names. The second BG editor Rex Ogle mentioned Rick Leonardi, I said, "Call him. NOW." Rick came on in tough circumstances-- the middle of a story that's also a crossover and an incredibly tight deadline and did a great job. GX: Where is most of the issue happening? This big room where the Doomsday fight happens seems to be a soundstage or something. With a giant Batman movie going on. DJ: We're inside one of the monitor rooms of Project Superman. The screens are showing us snippets of what's happening in the outside world. GX: It's interesting in that the way Alexandra finally puts Doomsday down is a somewhat different approach than others have tried in the past; he's basically just a big breaking-stuff machine and the traditional approach has mostly been to strategize around that instead of using it. 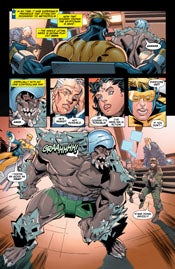 DJ: When I did the Doomsday origin story, we used to talk about ways that Doomsday could be killed. If he's supposed to evolve past a certain point, he would eventually be totally and completely unkillable. DJ: In theory, anyway. But the idea of Doomsday committing suicide occurred to me at that point and I was always waiting for a place to use it. GX: It seemed the whole story like you may have been building toward Alexandra dying at the end. Is there a reason you resisted having her take Doomsday's "rebirth" powers? DJ: We didn't want to overstate it, but certainly implied that Alexandra doesn't quite understand how her powers actually work. She has to physically touch someone to take their powers. She did not touch Doomsday in that issue. GX: The dynamic between Booster and Alex seems to turn romantic (or at least potentially romantic) very quickly--will that be something that carries over to the new universe? DJ: Kinda hard since Alex is dead, right? 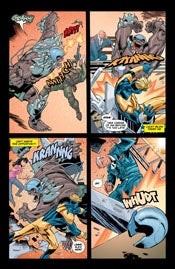 GX: What is that digital effect around Booster's belt/hip when he says "I think I have another way" before going into the Amazon/Atlantean battle? Was that scripted? DJ: Yes, that was scripted. It's chronal energy, seeping from his uniform. GX: There's a symmetry here: After four issues of being shot at and attacked because Adam thought he was Atlantean, Booster gets to the battle and starts getting attacked and shot at by Atlanteans. Was that the plan? DJ: More or less, yes. It was loosely constructed but certainly subject to change. GX: OK...now onto the hard stuff. Booster returns to Vanishing Point and it looks just about as dark and empty as Rip's lab was at the beginning of the story. Does the rest of our supporting cast still exist? DJ: Now for the hard answers. I don't want it to come off like I'm dodging the question, but some aspects of this fit into the idea that there's a story to be told down the road. I'll address it at that time. GX: You've said several times when confronted with the "new reality" idea that Booster did not fail in his mission to keep time on the straight and narrow. Alex's presence in Time Masters: Vanishing Point not only answers a lingering question but seems to confirm that. Between that, and the substantially-more damage to his costume between the last Leonardi page and your first page of art, is it possible Booster managed to do something in between those sequences, the extent of which won't be clear until Flashpoint is over? DJ: You'll have to wait until Flashpoint #5. What you see of Booster is what Booster did, however. GX: To fill in the blackboard, Alex would have to know a lot. How long was she floating around in the ether between when she was blasted and the end of Time Masters: Vanishing Point? DJ: I think it's safe to say she knew all that. Much of it was public information. Anything else came from Booster. So, to a certain extent, he served as his own warning. GX: What's in the backpack that Booster brought back with him from the Flashpoint Universe? Looking at #45 I can't seem to find him filling it before he leaves the cabin. DJ: Skeets! He puts Skeets in the backpack previously, right as he left the cabin in the woods. GX: I know this is a job for you, and it's a little different for the fans--but the end of a book like this has to be a little bittersweet, right? You guys had a great run and really reinvigorated a character you created. What would you want to say before we turn the page on Booster and the DCU? DJ: Yeah, it's a bit bittersweet. On the other hand, it was great fun for four years. I'm happy with the run, just as I was happy with the first one. I always say that the job of a writer and/or artist is to leave the character in a better position than you found him in. I have no doubt that over the course of these 47 issues, that Booster is now a better character, more strongly positioned to be part of the DC Universe. Everyone who worked on this book over that time, be they freelancers or on staff, contributed to that effort.

The Gold Exchange: Dan Jurgens Talks Booster Gold #47 and the End of the DCU

Someone Made a Pokemon FPS