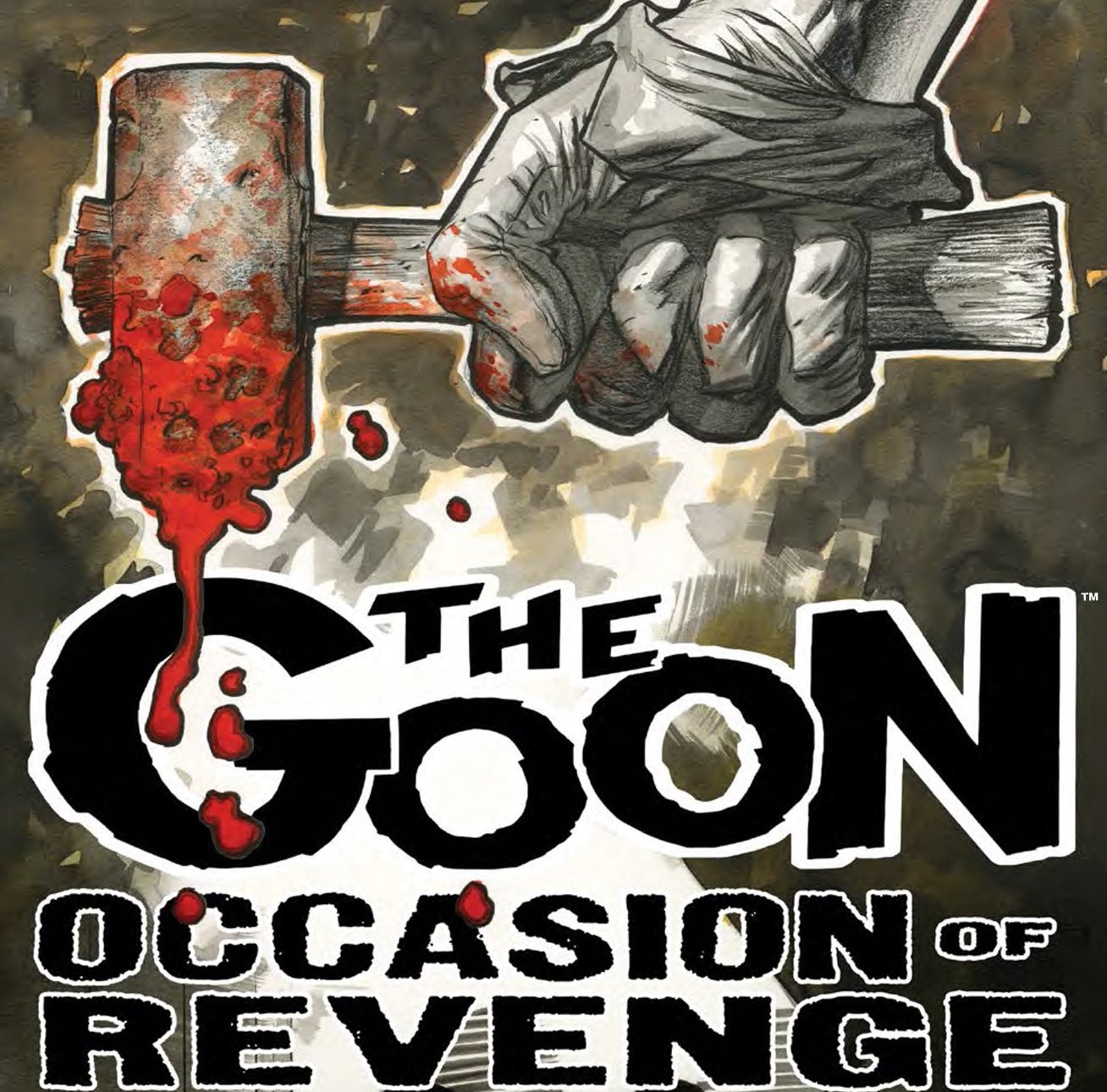 Eric Powell's The Goon has been a great comic since its debut fifteen years ago. From the very start it expressed a unique aesthetic and vision, fusing noir, horror, and comedy tropes into a cohesive world accompanied by Powell's masterful understanding of cartooning and storytelling. The Goon sits side-by-side with other long-running, auteur comics like Hellboy, Usagi Yojimbo, and even Cerebus. It's no surprise when each new installment in the series turns out well. What is absolutely stunning about The Goon: Occasion of Revenge #4 is that it is unlike anything Powell has done before. Even the brutality and raw emotion of Chinatown fails to approach the achievements of this issue.

Occasion of Revenge #3 presented the big turn for this mini-series when Ramona revealed her duplicitous intent and turned Kid Gargantuan against the best interests of his gang, leaving all of the consequences and decisions to wait for this issue. The setup was enough to leave a gnawing pit in the stomachs of readers and those expectations are not disappointed here. Occasion of Revenge #4 plays out in the most horrifying manner possible, comparable to the conclusion of Shakespeare's bleakest tragedies. There are some small elements of long-term plotting and side stories that feel out of place, but the bulk of the pages focus on the Goon's response to his betrayal, burning with his feelings of loss and wrath.

All of that power comes with the changes Powell has made as a draftsman. He has begun to experiment with inking most of his own work and the result has been a comic with far more emphasis on his pencils creating a lighter, more detailed touch. Although his characters are still cartoons, they feel more real and less like caricatures. The fine gray pencil shading that forms individual faces reveals their humanity and adds power to each close up. That same coating of greys helps to emphasize the noir mood of Occasion of Revenge, playing like a black and white film reel.

The gradual adjustment to this style over four issues makes the sudden appearance of bright colors in the final pages all the more shocking. They shatter the illusion of what has come before, emblazoning the sequence with a terrible light. This is the opposite effect of the joyful relief found with the discovery of color in The Wizard of Oz. Powell mutilates the relative calm of the Goon's war with the witches and tears down the world with bold yellows, oranges, and reds.

Those three colors construct the first half of two of the greatest pages that Powell has ever composed in his entire career in comics. They build an increasing focus on the Goon's face over three panels into a second page that shatters the issue and its protagonist. Panel borders are lost as faces and words swirl in a melee of action. The same question is repeated again and again as Powell renders the Goon's face in contortions of anger and pain. It's rare to see such a raw reflection of human emotion captured so well. These two pages are terrifying, haunting, and deeply saddening. They create an emotional experience that does not invite readers to join, but actively drags them down with it into the darkness.

Occasion of Revenge ends on a mic drop. Powell is aware of what has been done and recognizes there will be no catharsis or relief. He has created a shift in the story so damaging that no words can express what has just been shown. There is no "The End" or "To Be Continued"; there is no need. This is the cut to black at the end of The Sopranos, leaving the audience to sit uncomfortably with what they have just experienced. The Goon will return in 2015, but the series and its characters will never be the same. Like Powell, they are evolving, changing, moving forward into whatever terrible darkness is yet to come.

The Goon: Occasion of Revenge #4 is a Raw, Emotional Expression of Eric Powell's Growth (Review)